The Sixties, the Swinging Sixties, the decade of peace and love, but also the decade of Vietnam war protests, the deaths of John F Kennedy, his brother Bobby and of Martin Luther King. It was the decade that started with the arrival of the contraceptive pill and ended with a man walking on the moon. It was a decade of change, of riot and of revolution. In the Sixties, Formula 1 had its own revolutionary and his early masterpiece would run riot on the race tracks of the world.

The man was Colin Chapman and the masterpiece was his 1962 creation, the Lotus 25 Formula 1 car. Chapman and Team Lotus were part of the English “garagiste” movement that countered the hugely powerful but heavy cars built at the time by Ferrari and Maserati, by producing less powerful but lighter and more agile mid-engined machines.

Team Lotus first appeared on an F1 grid at the 1958 Monaco GP and apart from running the factory entry, it sold cars to privateers such as Rob Walker, who with Stirling Moss at the wheel, gave Lotus its first GP win at Monaco in 1960. For 1962, Lotus customers were sold the Lotus 24, so they were, to say the least, perplexed when the factory team turned up with the Lotus 25 for the opening race of the season, the Dutch Grand Prix! Whereas the 24 featured a conventional spaceframe chassis – a complex tubular steel affair – the 25 went where no car designer had been before.

The apocryphal tale goes that Chapman and fellow designer Frank Costin doodled the idea on a napkin over dinner. The new structure, made out of aluminium alloy box sections, was the first fully stressed “monocoque” chassis to be used in a race car. The story goes that John Cooper, himself no laggard in the design stakes, given that he is credited with making the seminal change from front-engined to mid-engined single-seater racing cars, took one look at the Lotus 25 in the Zandvoort paddock and asked Chapman where the frame tubes were in the car! 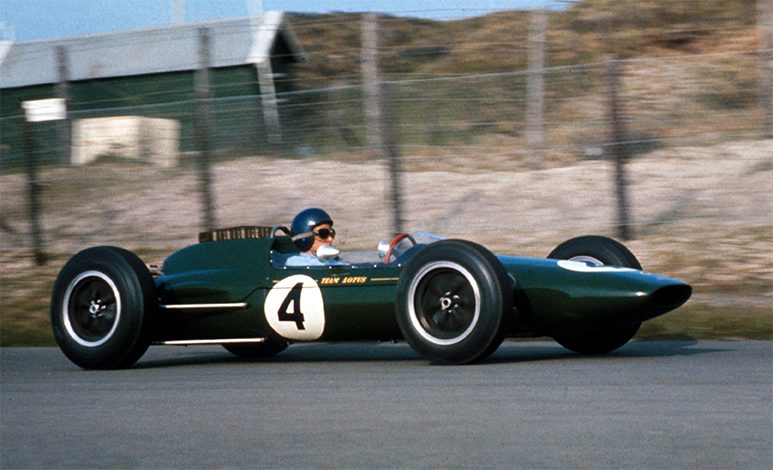 It was about half the weight of a conventional tubular design, much lower and narrower and placed the driver in the almost reclining position that is still the norm today, so that it became known as the “bathtub.” The lack of weight and its natural stiffness brought another advantage in that the car could run more compliant suspension, the main benefit of which came in the slow speed corners. Few technical developments in the 70 years of F1 have been as significant as this one, which stemmed from Chapman’s design mantra, “simplify, then add lightness.” Throughout its lifetime, the Lotus 25 was powered by the Mk.II 1496cc through to the Mk.5 1499cc versions of the Coventry Climax FWMV V8 engine.

There were two fuel cells, one in each of the aluminium pontoons that made up the side of the monocoque. Joining these two main elements together were two sturdy bulkheads, one behind the driver and the other over his feet, with a less substantial one at the level of the instrument panel and steering wheel. This would be the norm for Formula 1 chassis design for many years, really only changing with improvements in car and driver safety. 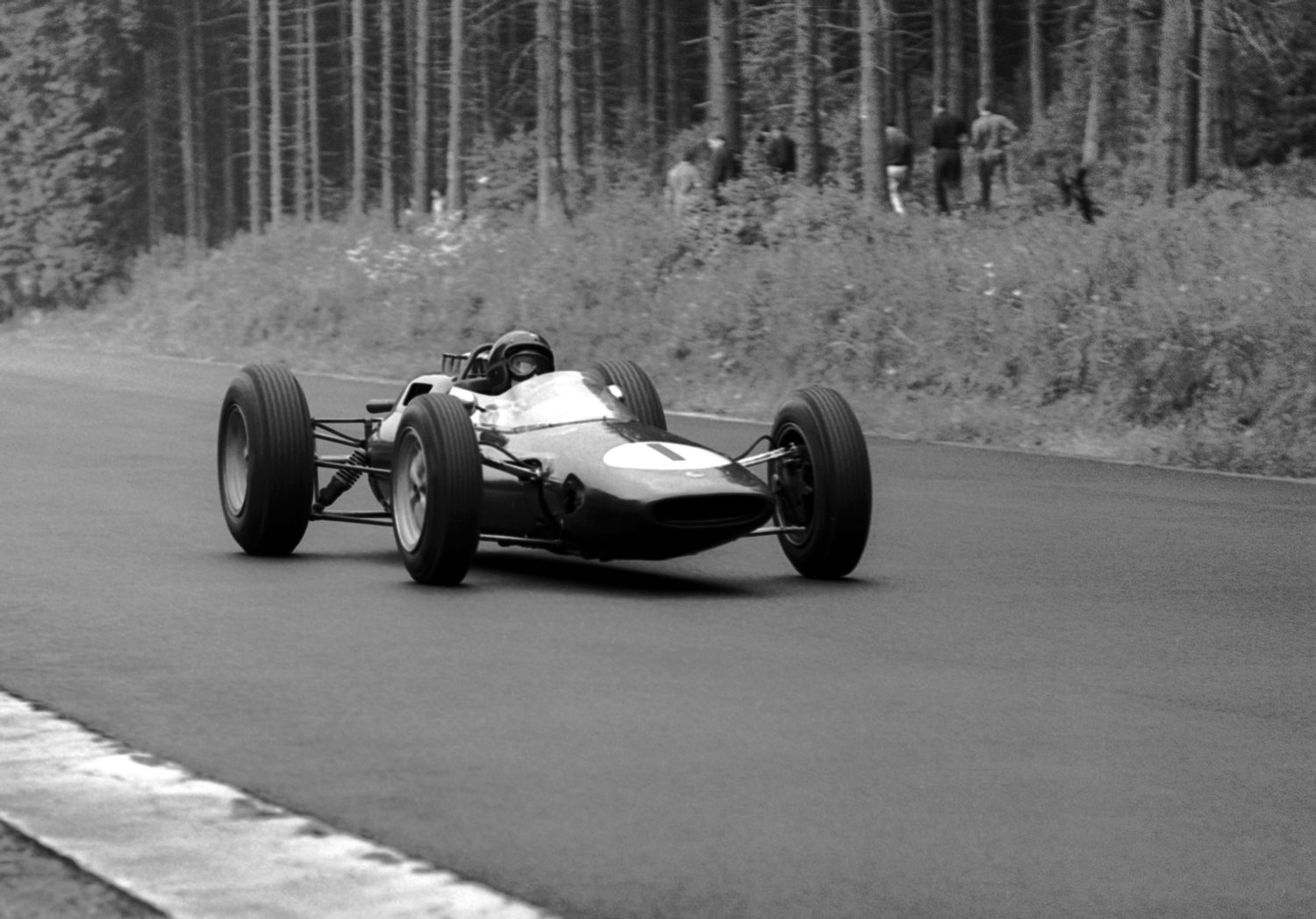 That pursuit of paring weight away at all costs meant Lotus cars were sometimes fragile and although Clark took pole position at six of the nine races in 1962, winning three of them, including his maiden F1 victory at Spa-Francorchamps in the Belgian GP, he missed out on the championship crown. There was no doubt the following year when the mercurial Scotsman at the wheel of the Lotus 25 romped to his first world title, beating Graham Hill by 73 points to 29. The Lotus 25 had a long life and Clark used it to win three more races in 1964, even though Chapman also started running the Lotus 33 that same year. In fact, as late as June 1965, the car originally launched three years earlier was still capable of winning the French Grand Prix, naturally enough with Clark at the wheel. 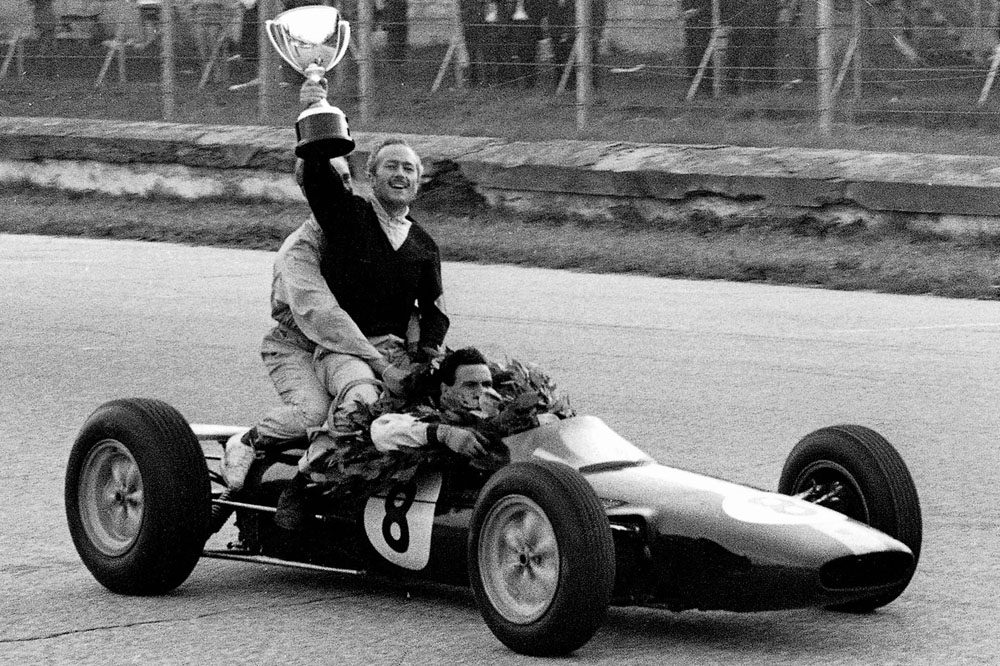 For most engineers, coming up with one ground breaking solution in a lifetime would probably be enough, but Chapman’s fertile mind never stopped: there was the Lotus 49, the first car to have the engine bolted directly to the rear bulkhead, acting as a stressed chassis member and he was also the pioneer of “ground effect” which involved fitting his F1 cars with skirts that speeded up air underneath the car thus sucking it down into the road. However, that 1962 Lotus 25 had a purity of line and purpose that makes it one of the classic racing machines. The car’s beauty can be summed up in the words of pioneering aviator and writer Antoine de Saint-Exupery, who said, “perfection is achieved, not when there is nothing more to add, but when there is nothing left to take away.” No doubt Chapman, himself a qualified pilot, would have agreed.