The 1973 Daytona 24 Hours counted towards the World Championship for Makes, but a year earlier the rules of endurance racing changed and cars like the iconic (and scary!) Porsche 917 were now outlawed. The big engines had gone, to be replaced by a maximum capacity of 3 litres.

So in some way, the 1973 event looked a bit like an American sports car race, including some older Porsche 908s on the grid. But even though Porsche was no longer building prototypes for long distance racing, it did send over two Porsche 911 RSRs. Technically, they were GT cars, but had to be entered as prototypes as their homologation had not come through yet. One of the 911s was entrusted to Brumos Porsche of Jacksonville, Florida driven by Hurley Haywood and his co-driver Peter Gregg. It featured a red, white and blue livery entered as “America’s Porsche Racing Team.” The other was entered by Penske Racing of Reading, Pennsylvania and would be driven by Mark Donohue and George Follmer. Norbert Singer, the man tasked with developing the car for racing had come over from Germany to oversee proceedings and spent his time dashing from one garage to another. Some factory mechanics had also made the trip to help out and Singer offered the drivers the good advice that if they kept the engine under 7500 rpm, it would last 24 hours. Gregg had a reputation for meticulous preparation and pulled his car apart in the weeks before the race. He found the flywheel was loose and informed Penske, who ignored the warning and the Donohue-Follmer car duly retired because of it. 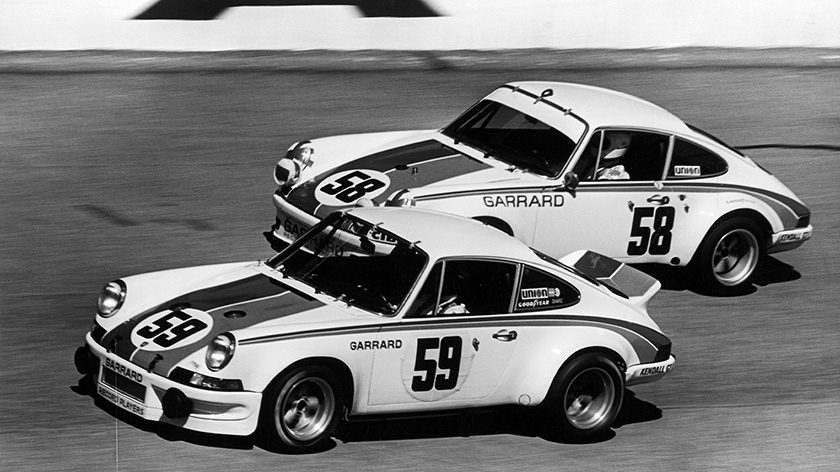 It was a race of attrition and the bigger faster cars that were favourite to win gradually dropped out or ran into problems, but the reliable 911 just kept going and was leading when the sun came up the Brumos car was in the lead. Porsche fans in the in-field got very excited as they tucked into their breakfast, but Singer and other Porsche management had no fingernails left to bite and told its drivers to slow the pace and bring the car home. 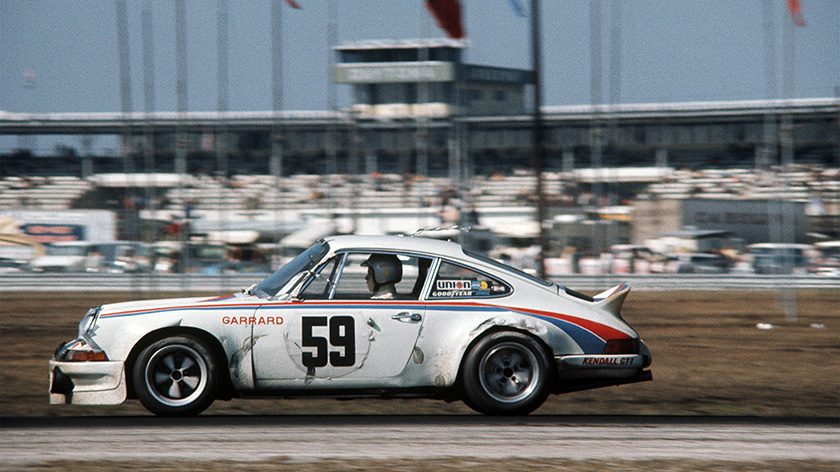 Haywood reckons he was almost sleeping in the car when the most dramatic moment of the race occurred. The track runs alongside a lake, a favourite with the seagull community and one of these birds collided with the 911 at around 240 km/h! The windscreen was broken and there was a spatchcocked seagull all over the cockpit. The crew had to keep Haywood running on track while they searched for a spare, eventually cannibalising a Porsche 911 they found in the car park – with the owner’s permission of course! From then on, the car had a smooth run to take the chequered flag and a memorable win. 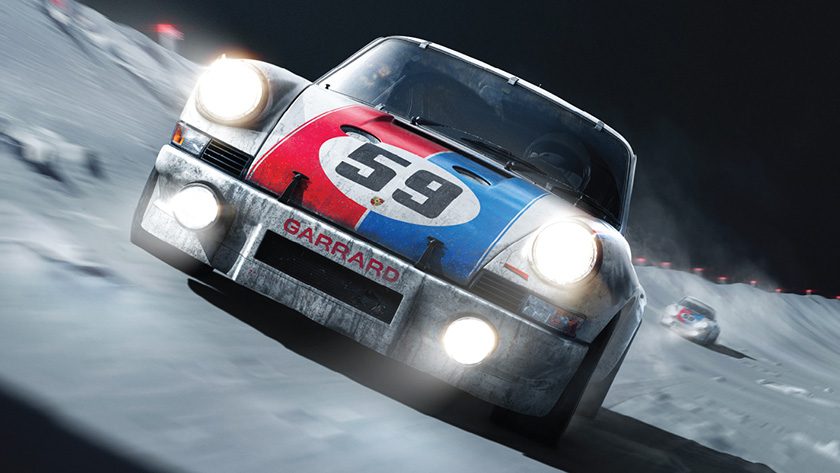 That’s the question posed by the twin poster which places a race in 2078, but not on Planet Earth, on the moon instead. Well, for starters it would have to be one of Porsche’s E-Performance models because there is no atmosphere, therefore no oxygen on the moon and so an internal combustion engine would not work. But that’s fine, because the driver would be clad in a suit similar to what astronauts in the decade of the 1970s wore, sitting in a car that resembles the Porsche 911 RSR but the part not visible to us is a mean machine. Everything is pushed to the limit on the moon so the race has been extended beyond the traditional 24 hours, and it takes place around the rim of the famous Giordano Bruno crater, located on the far side of the moon. Are there the odd droid or alien amongst the drivers? Only time and imagination can tell.