When television first invaded people’s living rooms, the end of cinema was predicted and in the same way, the advent of film and television commercials might well have sounded the death knell for the advertising poster. Nothing could be further from the truth and posters, specifically motor racing posters, are still with us today.

Selling motor cars by proving their worth on the race track is as old as racing itself and while the methods might have got more sophisticated, especially in the current digital world, the age old adage – win on Sunday, sell on Monday - is as true today as it was when Mercedes first began promoting their success back in the early years of the twentieth century. The Mercedes-Benz brand did not appear until 1926, but even before the two companies merged, they had enjoyed individual success at the end of the nineteenth century in what was then the very new sport of motor racing. Novelty value meant these races and also attempts on the land speed record, attracted huge crowds and plenty of interest from the general public. Clearly, it was in the company’s best interests to capitalise on this success and posters were a way of reaching a wider audience.

The earliest posters were produced in 1914, the work of a French artist, Henri Rudaux, whose style was inspired by the famous artist, Henri de Toulouse-Lautrec. These lithograph posters would set the template for racing posters that would remain essentially unchanged up to the end of the “Silver Arrows” previous dominant period in the mid-Fifties.

The artwork continued to be based on drawings even after photography became a common medium, simply because in order to achieve maximum impact and to capitalise on a win, the posters had to be printed and available as soon as possible after a race. In fact, much of the drawing would be prepared beforehand, with just the car’s racing number and the driver’s name to be added after the chequered flag had fallen. 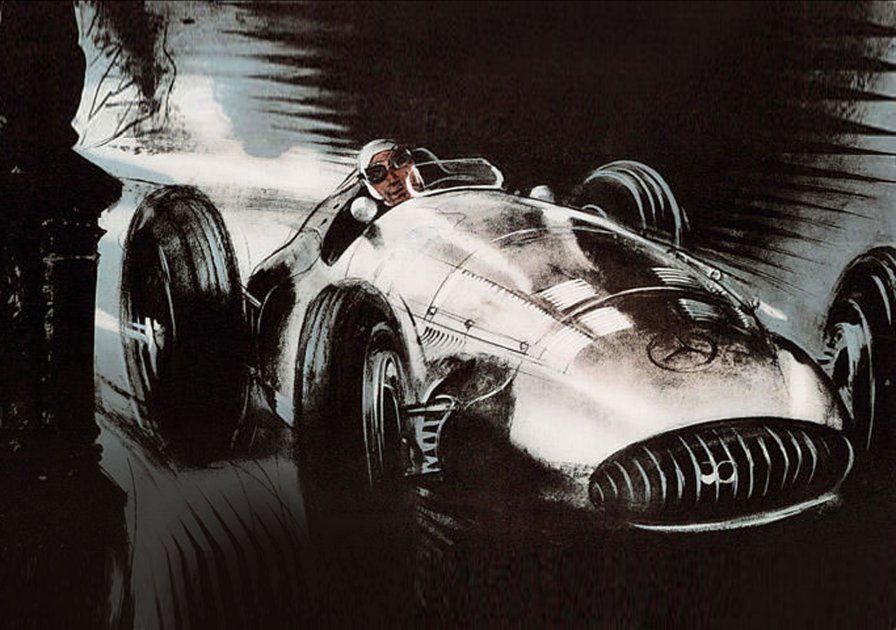 In the Twenties, a less flamboyant, more typographical style was ordained for these posters, but when the team returned to racing in the mid-Thirties, the artists were given more freedom to capture the excitement of the sport. In fact, artists like Walter Goschke and Hans Liska were as quick with their pencils as the cars were on track and they became as well known as top photographers are today. Goschke was known as the “Picasso of the race track,” his work featuring minimal use of colour and yet really capturing the feeling of speed and action. From the mid-Forties, Mercedes-Benz in-house graphic designer Hans Liska became the creative force behind advertising pamphlets and posters, his style drawing on his past experience as a newspaper illustrator, a job where speed was of the essence. What better quality when capturing the fastest racing cars on the planet. The subject matter went further than just the Grand Prix cars, with posters also capturing great races such as Le Mans and the PanAmericana. 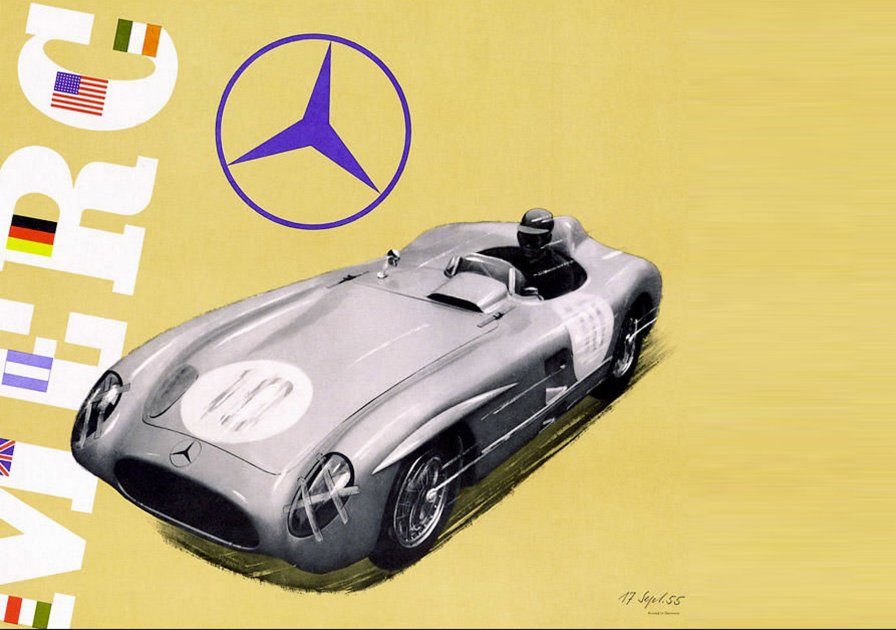 It was during the company’s dominant return to what was now the official Formula 1 World Championship in 1954 and ’55, that the style of the Mercedes posters changed, reflecting the modern approach to art owing more to style than realism. The man responsible was Anton Stankowski, who became known as the “father of concrete art.” He produced artwork for every round of the 1955 championship, all based on a single design to make them more easily identifiable as a Mercedes-Benz product. In a way, this was the dawn of “corporate identity.” That year, the final round of the championship was the Italian Grand Prix at Monza in which the Mercedes Silver Arrows finished first and second with Juan Manuel Fangio and Piero Taruffi. It also marked the end of the Mercedes winner posters.

Until now that is, because today, the “Winner Poster” has been revived and this year, the Mercedes-AMG Petronas F1 Team in conjunction with Automobilist is producing a special limited edition poster each time one of its cars wins a round of the FIA Formula 1 World Championship. 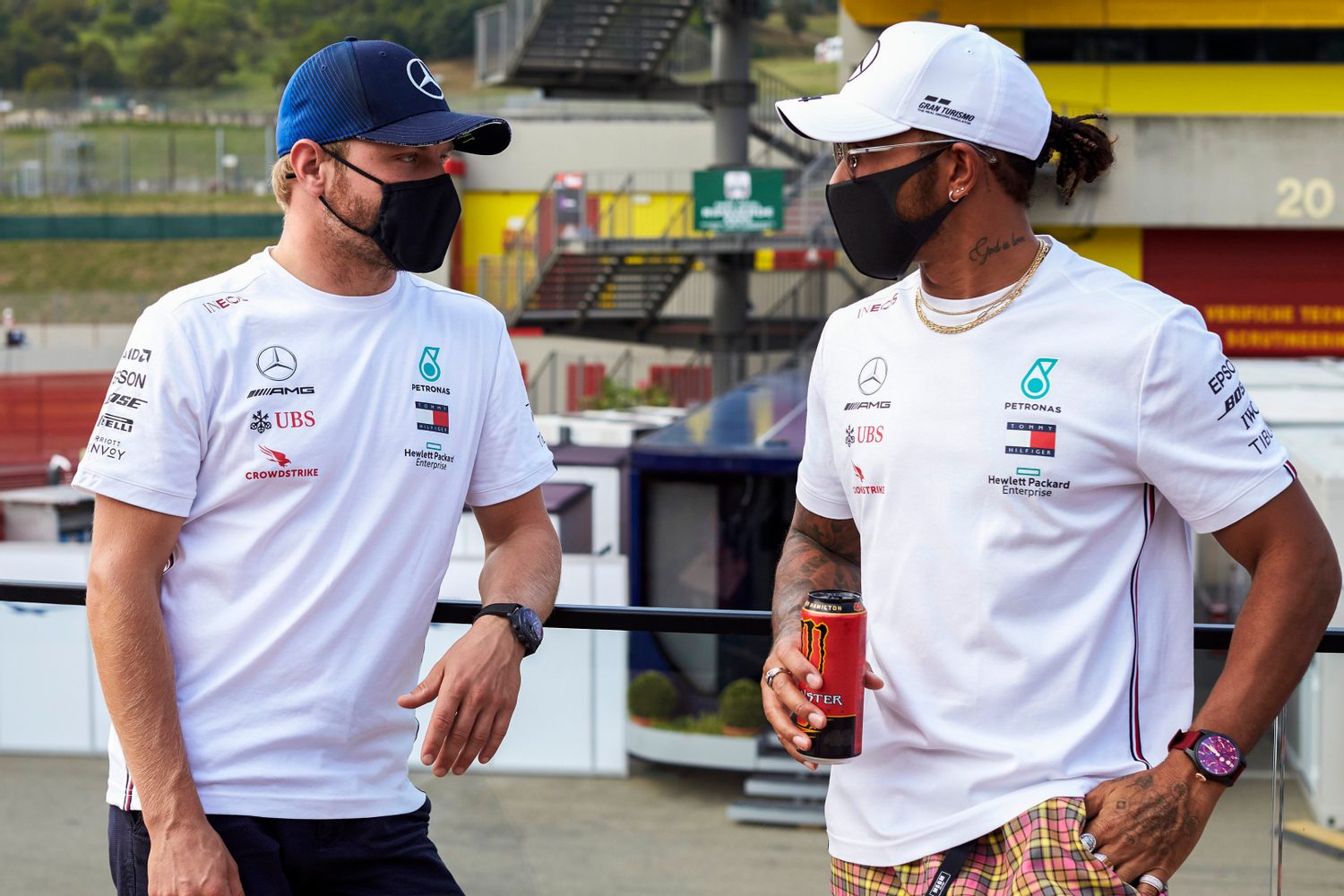 It’s certainly keeping us busy, because, thanks to Lewis Hamilton and Valtteri Bottas, the team has only had two races without the top spot in their bag (as of Tuscany GP 2020). Produced using the very latest technology, including hot-foil silver embossing, the poster is every bit as up to date as the car it celebrates, but the ethos remains the same as those wonderful prints from the Thirties through to the Fifties, with bold simple lines and a background reflecting the national flag of the race’s host nation. The current form of the Mercedes W11 car suggests our artists and production crew could be quite busy for the remaining rounds!