The German firm was attracting plenty of customers, winning its class in races at the Nurburgring and Le Mans and other famous European circuits. To expand sales into the Americas, what better way than tackling Mexico’s fearsome Carrera PanAmericana? The significance of this event in Porsche’s history is evident in the name, as Carrera, the Spanish word for race, has featured in the range for over 60 years now.

1953 was the first year the factory sent an official entry to the PanAmericana, by then in its fourth year. It was the most fearsome road race on earth, which ran through Mexico from North to South, from the border with Guatemala to the USA. Even though it was like no other race on the calendar, it counted towards the World Championship for Makes, therefore the big guns of the racing world all took part, as well as plenty of American car companies who made the trip over the border from the USA. The race took place in November, covering a total distance of just over 3000 kilometres, split into 8 stages over five days, like a rally and also like a rally, many teams entered two man crews, with the co-driver reading pace notes to the man at the wheel. Others attempted it solo, having painted markers on the road, with occasionally terrifying results, leading to the death of five competitors. Only 60 of the 182 entrants completed the course.

The first part of the race took in some truly scary mountain roads with sheer drops as they climbed as high as 1900 metres. Later sections finally found the competitors on tarmacked roads where the cars hit ridiculously high speeds. Police and troops were deployed along the entire route with orders to shoot any spectators who stood on the road!

With it’s small 550 coupe, Porsche was not looking for the outright win: that went to a certain Juan Manuel Fangio no less, teamed in a Lancia with Gino Bronzoni and they had a hell of a dice with their team-mates, including another well known Formula 1 name, Piero Taruffi, partnered with Luigi Maggio. Porsche was after top honours for the small sports car class and had sent over a full factory team, managed by the legendary “Racing Baron,” Huschke von Hanstein. German ace Karl Kling was at the wheel of a Porsche 550 Spyder, which featured the very latest tubular ladder-type chassis enclosed in a lightweight aluminium body. The engine was mid-mounted, only producing 79 horsepower from its 1.5 litre engine. But it could still hit a top speed of 200 km/h thanks to its light weight of…550 kilograms, hence the name of the car.

However, despite excellent preparation the race did not go to plan and there were pre-race dramas to contend with. After cars and equipment landed in New York, a case of mistaken identity led to Karl Kling spending a few days incarcerated in Ellis Island. During the war, he had worked as an engineer at Daimler-Benz, but in the States, he was mistakenly placed on a list of former Nazis! In the race, his team-mate Hans Hermann crashed out with broken suspension and Kling himself retired with mechanical bothers. 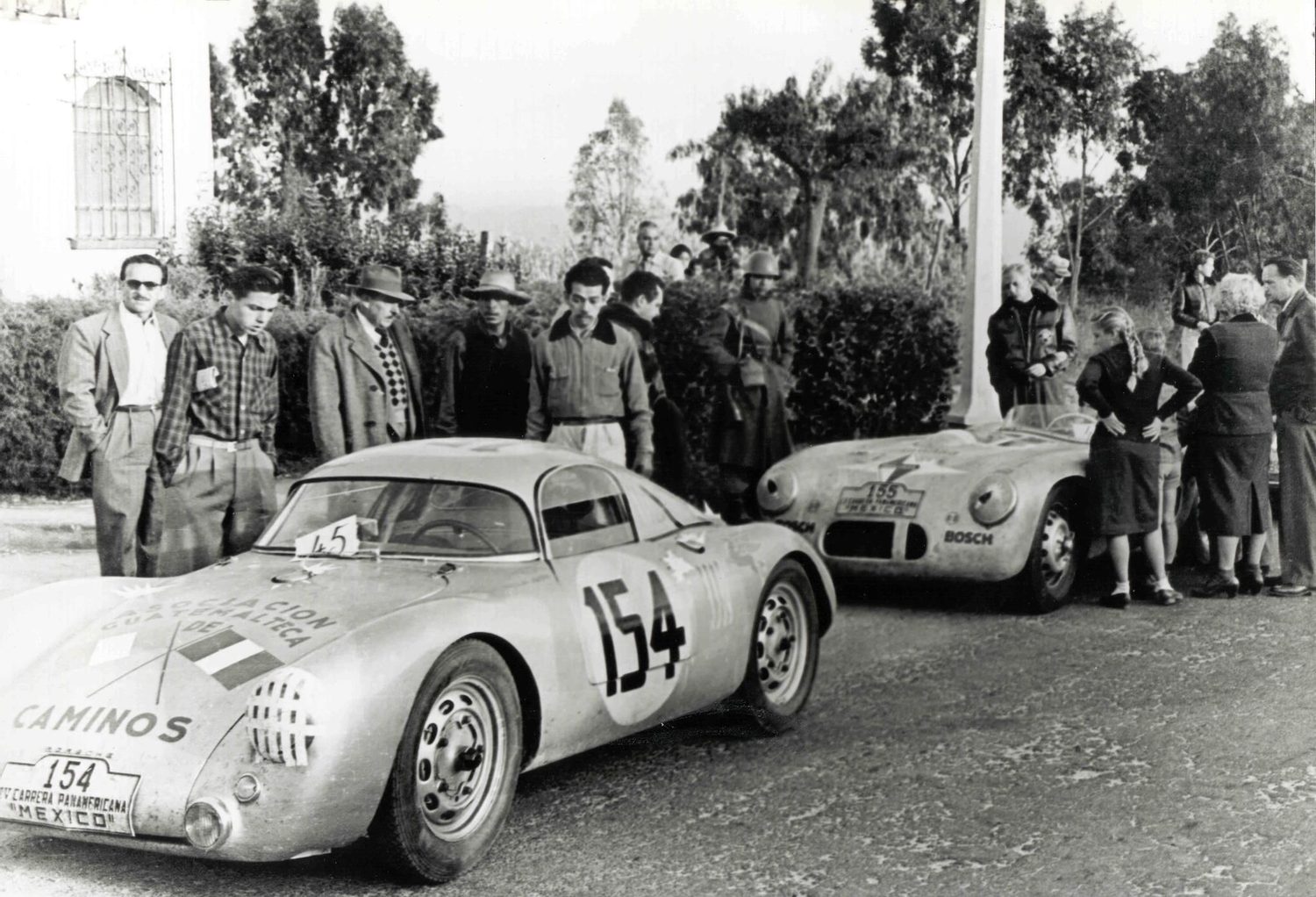 Would anyone be left to uphold Porsche honour? It was left to the privateer entrants. Jaroslav Juhan, an exiled Czech who ran a Porsche dealership in Guatemala took over the class lead in another 550 Spyder that had previously raced at Le Mans, but when he too broke down, that left only two cars running in the class, both Porsches, with the win going to Jose Herrarte Ariano and Carlos Gonzalez from Guatemala, who finished 32nd overall in this most frightening of four wheeled challenges. Undaunted, Porsche sent two cars to Mexico for the 1954 event for Herrmann and Juhan, this time fitted with the legendary flat four four cam engine. Designed by Ernst Fuhrmann in 1952, it featured an innovative valve drive which allowed drivers to reach astonishing speeds. The engine is characterised by two overhead camshafts per cylinder bank, controlled via shafts with angular gears – the eponymous vertical shafts. For the technical among you, it means it went very fast! Good enough for Herrmann and Juhan to finish first and second in class and, incredibly, third and fourth overall.

Will Porsche still be tackling challenging scenarios to prove its products in the future? 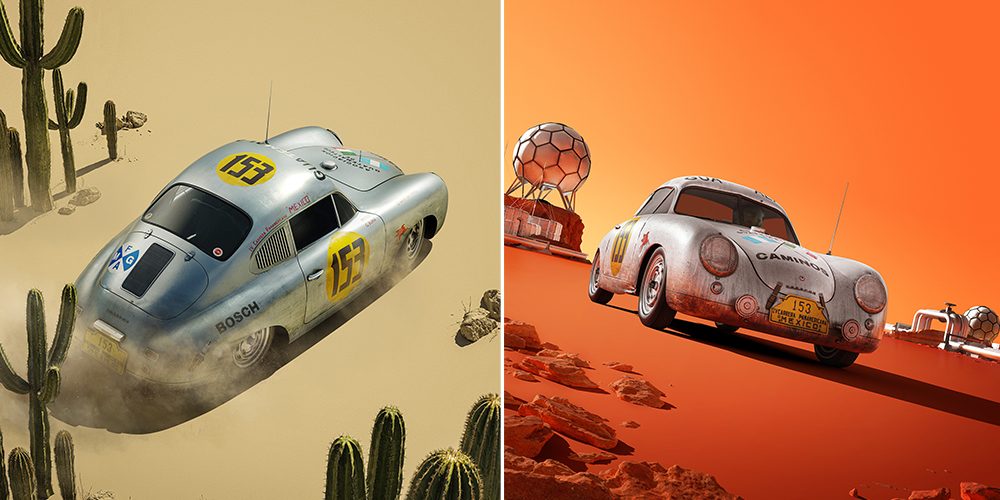 What about 2096? By then, we might be looking beyond planet earth for adventure. What better way to recreate the dry, dusty and deathly roads of Mexico than a visit to Mars, the inhospitable red planet. Is there life on Mars? Even David Bowie didn’t know the answer to that one, but Porsche has imagined just such a scenario for a futuristic 356, brought to life with a poster from Automobilist’s design studio, working out some creative genius to create two products - one that captures the dusty terrain, cacti intact, and a second that brings to life and imagined version of the red planet at the end of this century. The livery of the Martian Race takes heavy inspiration from the winning design of 1953, but what’s ticking inside the engine is something only Porsche’s engineers can imagine and design.