• Automobilist has released a collection of 3 Design Posters featuring De Tomaso Automobili's newly revealed P72 Model
• The car and the collection is released to coincide / celebrate the 60th Anniversary of the De Tomaso brand's original founding
• Collection commemorates the legacy and untold story of De Tomaso founder Alejandro De Tomaso
• The P72 is "A Modern Day Time Machine." "A car with Perpetual Beauty."

July 4, 2019 - Goodwood Festival of Speed, Chichester, UK: Automobilist, automotive fine art maker, has partnered with Italian car manufacturer De Tomaso Automobili to celebrate the 60th anniversary of its original founding and to announce the return of the iconic brand with the release of the P72 Model.

The Design Poster set features the newly revealed P72 from three different angles: Side, Top, and Front Views. The collection also features De Tomaso's updated logo, which has been created for the "next generation" of the company. With a long past, the release of the P72 looks to be a fresh start for the De Tomaso company.

Founded in 1959 by Alejandro De Tomaso, the De Tomaso manufacturer was most notably known for its iconic Vallelunga, Mangusta, and Pantera models it produced during the early 1960s throughout the '70s. During this time, De Tomaso also produced various prototypes and racing cars. The P72 features a manual transmission, as well as the first all-carbon fibre production chassis of its kind. The interior showcases an elaborate combination of design and exotic materials. Polished copper and diamond pattern detailing adorn the cabin, fashioning a true sense of drama and occasion. The classically designed switchgear and circular analogue display dials take inspiration from the timeless design themes of the '60s and '70s era. 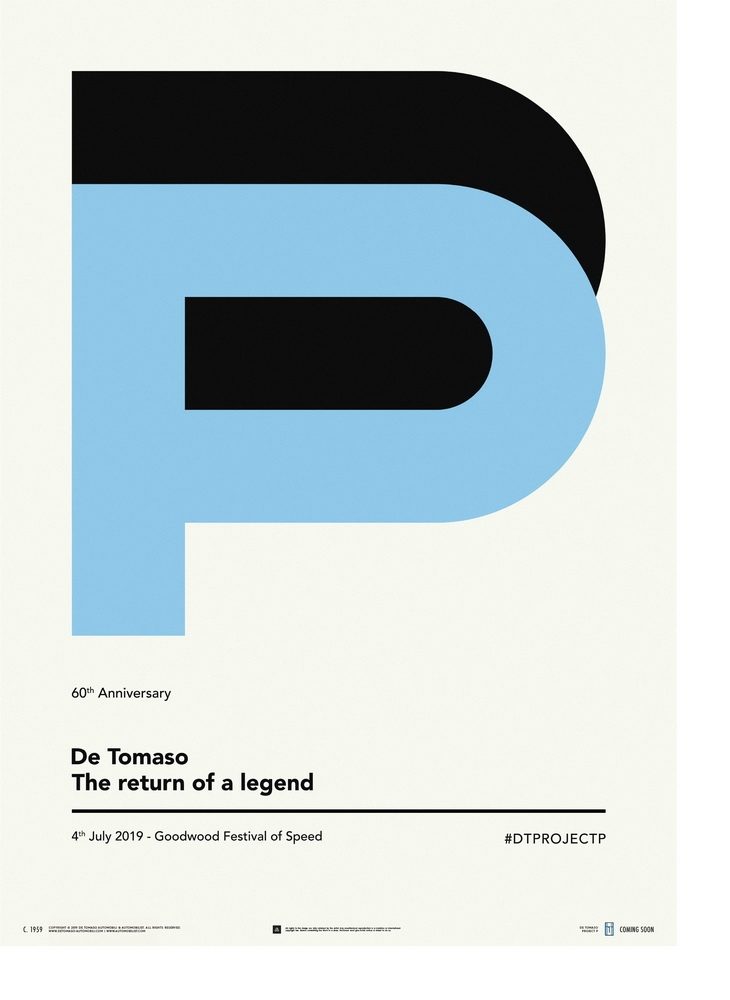 Announced by De Tomaso Automobili in a press release on May 15, 2019, the company revealed it would return to the automotive industry by teasing fans with a mysterious #DTProjectP Poster, one it had commissioned from Automobilist (see on the left).

During the July 4th unveiling at the Goodwood Festival of Speed, Automobilist was present with a camera and posters in hand to capture both the crowd's reactions and side-by-side shots of the model and posters. You can see the entire unveiling of the collection below.

Fans of the P72 and the De Tomaso Brand can purchase "The return of a Legend" Design Posters Collection online at Automobilist.com.

"We are delighted to announce the launch of this exclusive car. We have devoted numerous days and nights developing a car that can live up to its predecessor. The P72 evokes the spirit of Alejandro de Tomaso, the brand and the eras that this car represents" - Norman Choi, Chairman of De Tomaso