The second part of our look at the highlights of Scuderia Ferrari’s 1000 races in Formula 1 takes us to the Seventies and begins with a trip to South Africa.

For this, the opening round of the season, Ferrari turned up at the Kyalami circuit with four cars for three drivers, Jacky Ickx, Clay Regazzoni and new signing, Mario Andretti. The race would be run on Saturday so qualifying began on Wednesday in very hot conditions. Jackie Stewart set a time of 1’17”8 in the Tyrrell that would prove unbeatable. Two of the Ferraris were on the second row, with an off-form Ickx down in eighth place.

On Saturday, the starter (no red lights in those days!) lifted the South African flag and lowered it almost immediately, which caught the front row by surprise. Regazzoni led the field the first time across the stripe, ahead of Emerson Fittipaldi in the Lotus, Ickx, who had an amazing opening lap, Denis Hulme in the McLaren, Pedro Rodriguez in the BRM and Andretti, who had dropped back several places.

On lap 7, Hulme passed Fittipaldi and ten laps later the New Zealander also dealt with Regazzoni to go into the lead. As for Andretti, having been passed by Surtees, he was fighting with Rodriguez in the BRM and Jo Siffert for fourth place. At two third distance, Regazzoni began to suffer with vibrations and he was soon passed by Surtees and Andretti but the Englishman’s eponymous car had to retire with an oil leak.

With 9 laps to go, Hulme led Andretti by just under 10 seconds. The order seemed set in stone between these two, but the Hulme’s McLaren developed a suspension problem. Andretti closed in and then took the lead.

Mario, a three times USAC champion was considered to be a star in the making in Formula 1 and was first past the chequered flag ahead of Stewart and Regazzoni. His family emigrated to the United States from Italy when he was still a kid. That day he became the third driver to win on his debut with the Scuderia, joining Juan Manuel Fangio who did it in 1956 and Giancarlo Baghetti who won in France in 1961. The last of Andretti’s 12 wins came at the 1978 Dutch Grand Prix and incredibly, that was the last time an American driver has won a Formula 1 Grand Prix. 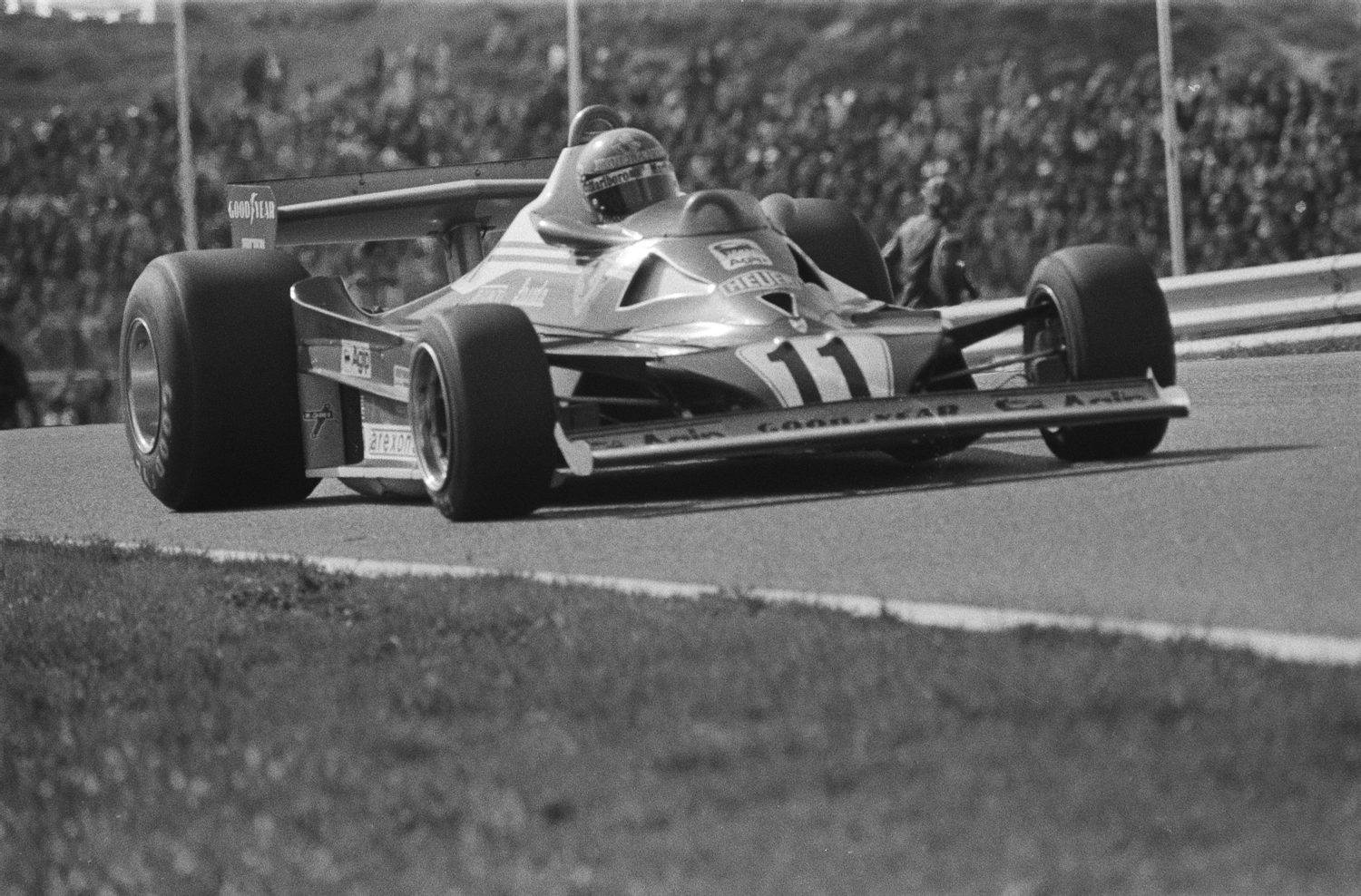 The very first Dutch Grand Prix took place on 26 August 1977. It was race number 13 of 17 making it the longest F1 season up to that point. Niki Lauda arrived amid the sand dunes at Zandvoort with a comfortable lead in the championship, 16 points ahead of Jody Scheckter and 20 points of his Ferrari teammate, the Argentine Carlos Reutemann.

The front row featured pole man Mario Andretti in the Lotus and Jacques Laffite in the Ligier, with Lauda fourth. There was a strong sea breeze blowing as the race got underway. Andretti was quicker off the mark than Laffite but James Hunt was even sharper, taking the lead at the slightly banked first turn. Andretti hesitated, allowing the Ligier to get ahead of him, with Lauda still fourth. Andretti and Hunt were wheel to wheel on lap 4 and on lap 5 and they collided, which the day before, the canny Lauda had suggested might happen, as he admitted the Lotus would be unbeatable barring any mishaps. Hunt was out of the race but Andretti charged back up the order, only to drop back with engine problems, just as he closed in on Lauda, the Austrian then passing Laffite on lap 22 and going on to win. It was his fifteenth and last win for the Prancing Horse, which today puts him second on the all-time list of Ferrari winners behind a certain Michael Schumacher. It took 20 years for Niki’s record to be broken! 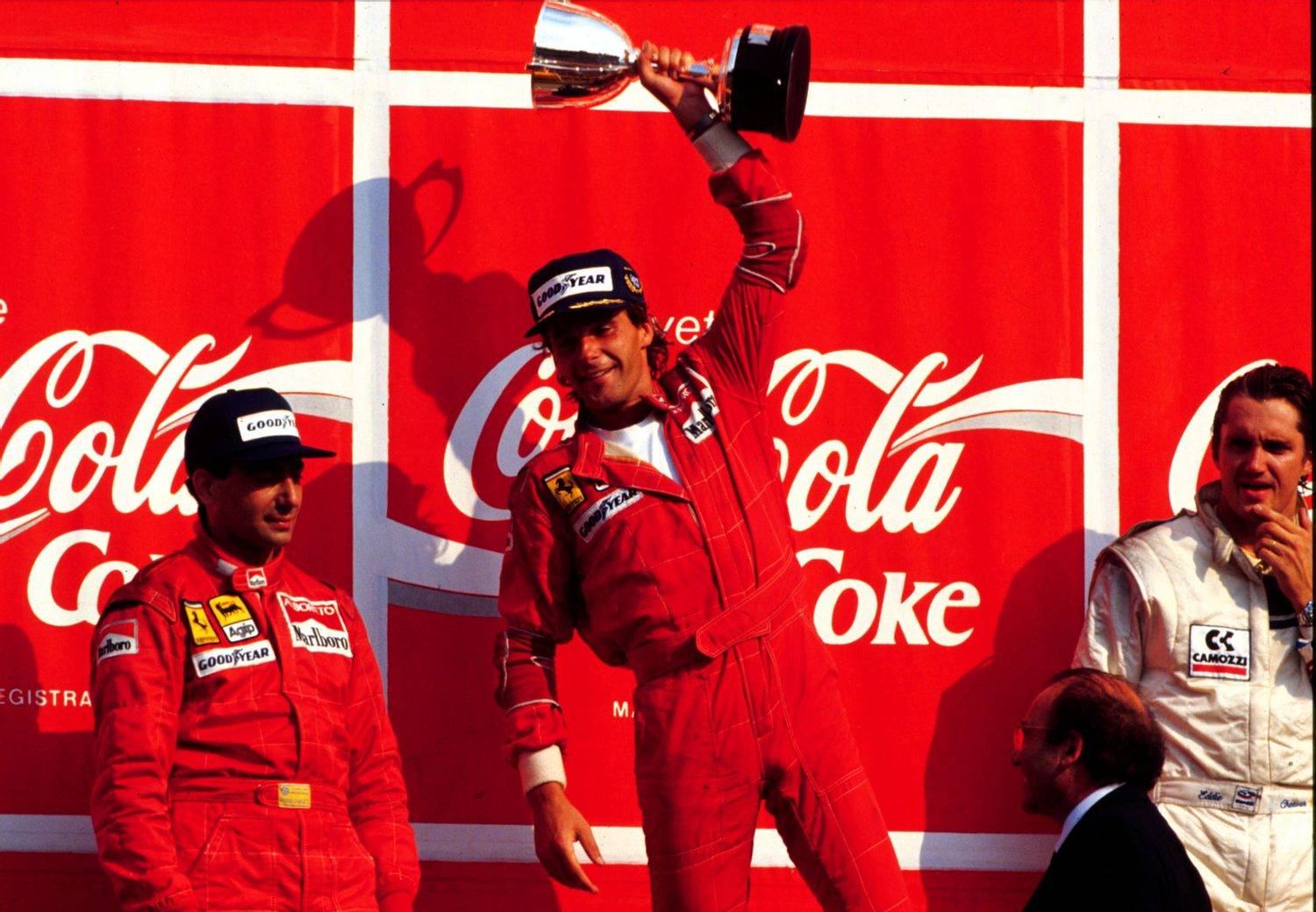 Enzo Ferrari died on the 14th August 1988. His passing marked the end of an era and was felt throughout the racing world, even though he had not been seen at a race track for several years. In terms of the racing that year, there wasn’t much for Scuderia Ferrari to smile about, nor indeed any of the other teams bar one. It was the year of total McLaren dominance, as Alain Prost and Ayrton Senna, the Brazilian in his first year with the Woking team, shared all the wins and most of the second places up to F1’s arrival in Monza. Surely nothing would stop them at the “Temple of Speed?”

A key element of how this story unfolds is the fact that Jean-Louis Schlesser was standing in for the injured Nigel Mansell at Williams. “Schless” was vastly experienced but this was to be his first F1 race. On the grid, the McLarens had produced yet another front row lockout, with Senna on pole, while the Ferraris of Gerhard Berger and Michele Alboreto lined up behind them on Row 2. Although fighting each other, the McLaren drivers seemed to have everything under control, until lap 31 when Prost began to slow, allowing both Prancing Horse cars to catch and pass him, much to the delight of the eighty thousand “tifosi” who jumped to their feet and cheered. Senna was told over the radio to slow the pace to spare his Honda engine, which he could do with impunity given the size of his lead. However, on the penultimate lap, he came up behind Schlesser, who appeared to let him through at the first chicane, but as the Williams driver tried to take the corner he locked up and hit the back of the McLaren and that was Senna’s race over.

The crowd could not believe what they were seeing: within a few weeks of the death of the most important figure in Italian motor sport, Ferrari finished first and second – Berger ahead of Alboreto – at their home track. For the podium ceremony, it seemed the entire crowd had flocked onto the track to cheer their heroes.