In the third part of our look at Scuderia Ferrari’s 1000 Grands Prix, we start with a Mexican fairy tale featuring two of the great champions, Alain Prost and Nigel Mansell and an overtaking move still talked about today. However, one figure stands head and shoulders above the rest in these three decades, the seven times world champion, Michael Schumacher.

Race day in Mexico City dawned with no indication that this could be a good day for Ferrari, with Mansell fourth on the grid and Prost down in 13th. This was still an era of McLaren dominance and Gerhard Berger and Ayrton Senna had locked out the front row.

At the start, Riccardo Patrese in the Williams and Senna both got ahead of Berger and by lap 13 Mansell had moved up to second. But it was Prost who caught the eye as he was cutting through the field, and by the second half of the race, the Frenchman had caught up to the leading group.

Fifteen laps from the finish, Prost passed his Ferrari team-mate and gained ground on Senna who started to suffer with tyre degradation problems. Nine laps from the end, Prost managed to get himself into the lead, overtaking Senna at the exit of the first corner, with the Brazilian forced to retire three laps later when one of his rear tyres exploded. With Senna out of the race, Berger and Mansell began a duel for second place, a thrilling fight which ended with the Englishman pulling off one of the sport’s most famous passing moves, around the outside of the very fast and banked final corner, the Peraltada. It was a spectacular move only a few kilometres from the finish line that gave Ferrari an extraordinary one-two finish and Prost his second victory in his first year with the Prancing Horse. 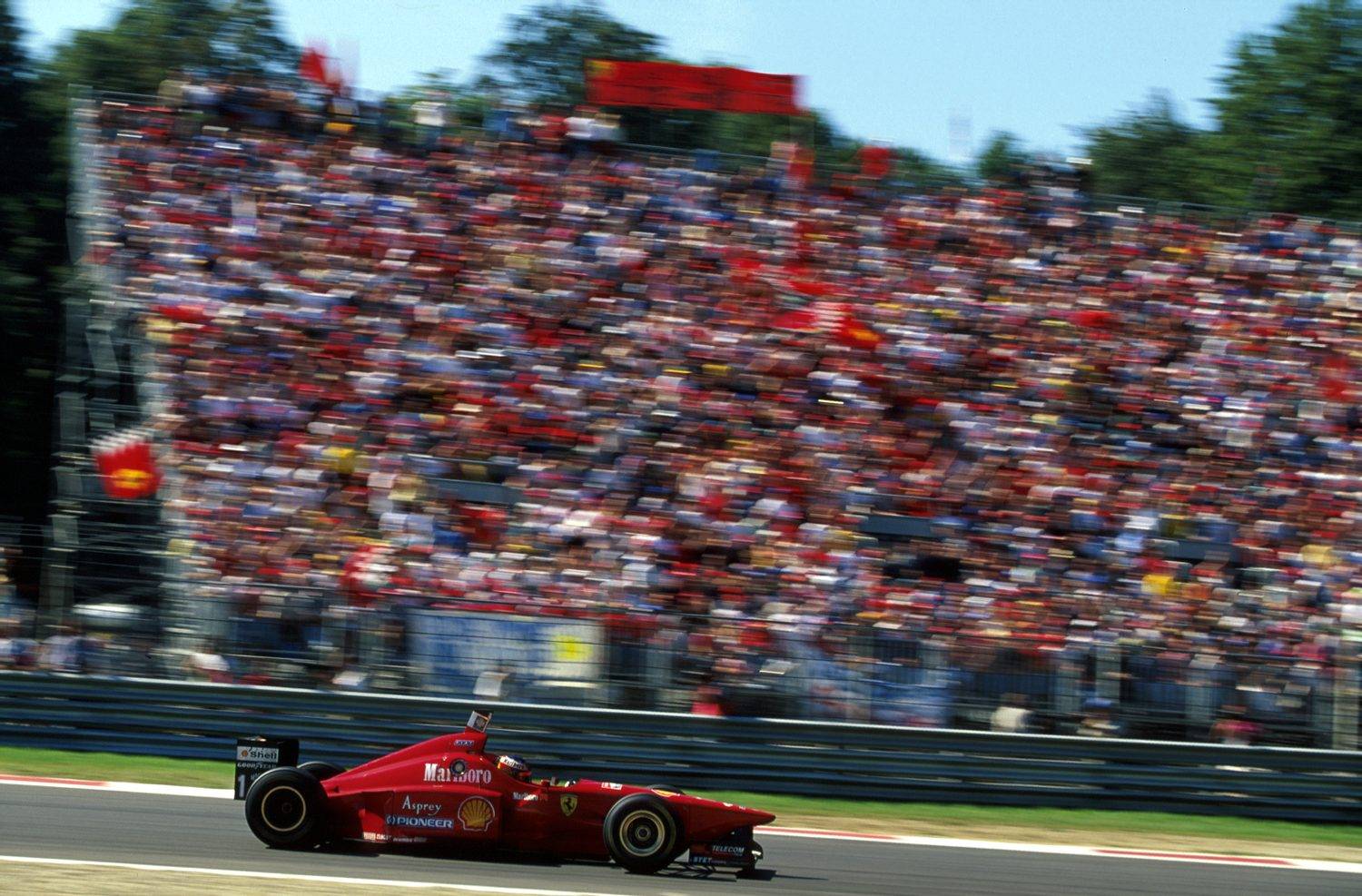 This was Michael Schumacher’s first season with the Maranello squad and he arrived at Monza off the back of winning the Belgian Grand Prix, his second with the Italian team. Williams locked out the front row with Damon Hill ahead of Jacques Villeneuve. Schumacher was third. The start at Monza is often chaotic and so it proved that day, with Jean Alesi coming through to lead from sixth on the grid in the Benetton, but Hill got past at the second Lesmo chicane. A new tyre barrier at the second chicane was about to cause chaos. Villeneuve hit it hard and one of his wheels bounced into the suspension on David Coulthard’s McLaren, so both fancied runners were out. Alesi was next to hit the barrier and Hakkinen had to pit for a new nose on the McLaren after he hit some of the debris.

A couple of laps later Hill hit the barriers, this time at the first chicane and he too had to retire, which left Alesi in the lead ahead of Schumacher. The two men duelled until lap 30 when the Frenchman locked a wheel and the German shot into the lead, banging in a series of fast laps in his trademark style, so that after his tyre change, he still emerged ahead of Alesi and carried on to take the chequered flag for his first win at Monza in Ferrari red. If he needed a lesson in what it meant to be a Ferrari driver, he certainly got it from the ecstatic tifosi who invaded the track, creating a sea of red down the main straight as the podium ceremony crowned their hero. 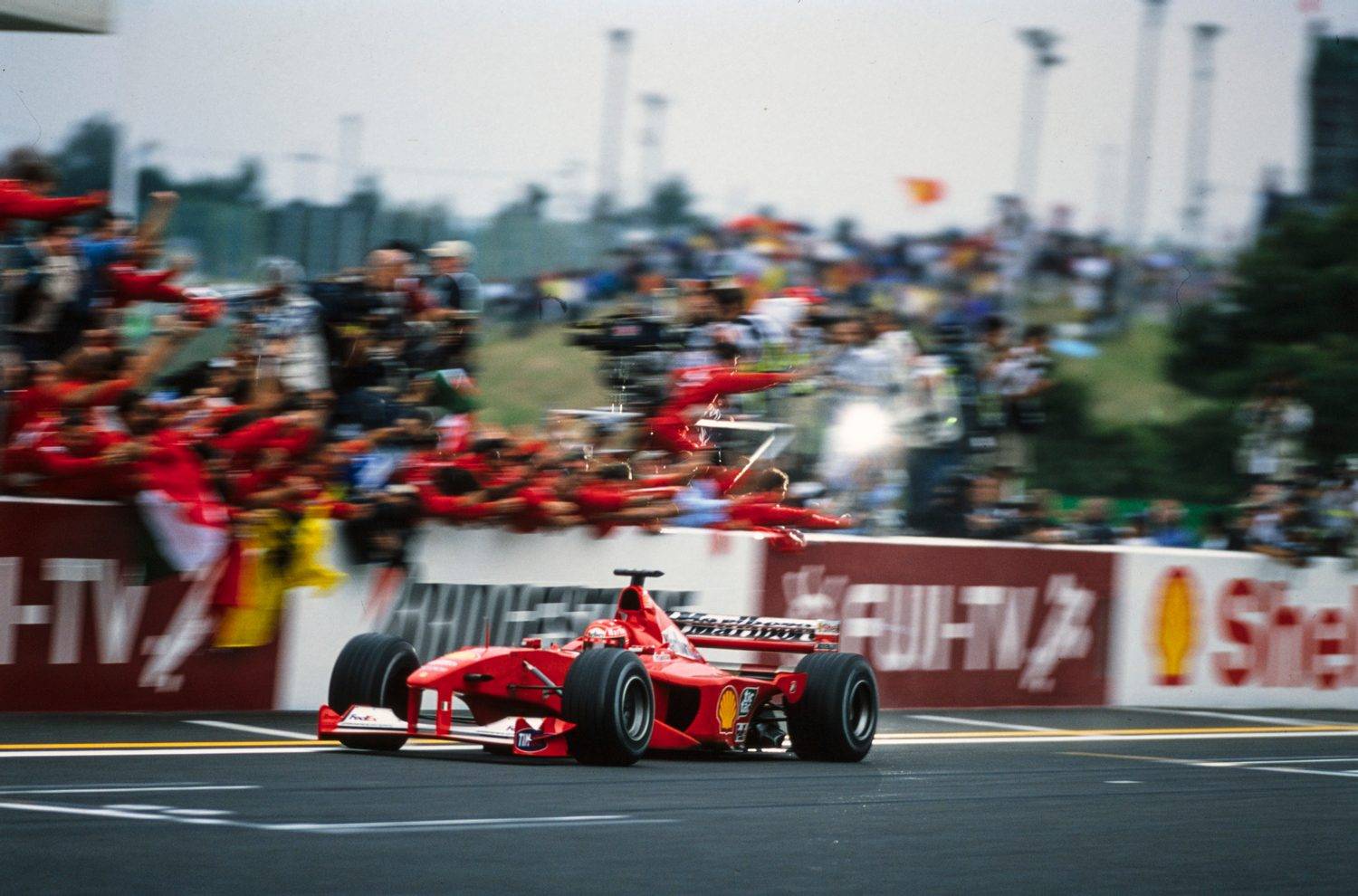 Ferrari turned up for the start of the 2000 Formula 1 season spoiling for a fight with a very competitive package and a driver line-up of Michael Schumacher and Rubens Barrichello. The season turned into a duel between Schumacher and Mika Hakkinen in the McLaren and Michael arrived in Suzuka leading the Finn by eight points. The Maranello marque had not won the Drivers’ title for 21 years so it’s fair to say there was a lot at stake.

In qualifying, the two contenders were in a class of their own, lapping within thousandths of one another and five times they traded fastest laps. In the end, the Ferrari man took pole. When the lights went out, Mika got the perfect getaway to take the lead going into the first corner. He and Schumacher were over half a second quicker per lap than the rest of the field. On lap 30, light rain began to fall and the German made the most of the tricky conditions to close the gap. When Hakkinen pitted for tyres, Schumacher pushed like mad for three laps before coming in for fuel and fresh rubber and emerging from pit lane with a two second advantage. The final 13 laps went by without a hitch but Prancing Horse fans the world over had their collective heart in their mouth all the way to the chequered flag. Back in Maranello, the early morning rush hour was just beginning: the church bells rang and the car horns hooted, as the title came back to Ferrari for the first time since Jody Scheckter’s win in 1979. Ferrari would win all the titles from here on in to the end of 2004. 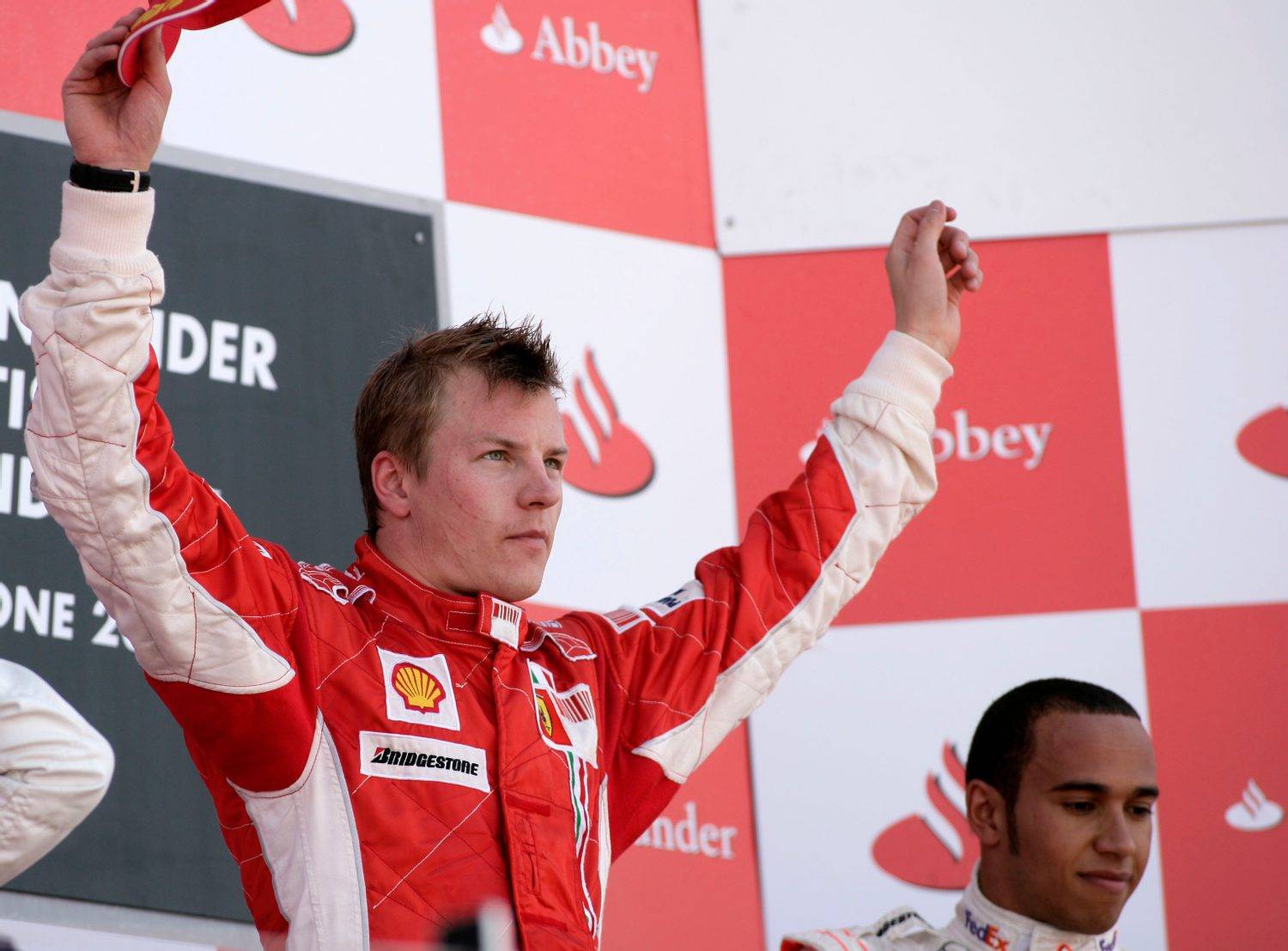 The race at Silverstone would mark the Prancing Horse’s 750th Grand Prix participation with Kimi Raikkonen and Felipe Massa at the wheel. The home favourite Lewis Hamilton took pole position in qualifying, with the McLaren one tenth ahead of the Finnish Ferrari driver, while Felipe Massa was fourth in the second F2007, but on Sunday, the Brazilian stalled at the start and had to begin his race from pit lane.

When the lights went out, Hamilton maintained the lead ahead of Raikkonen and Fernando Alonso in the second McLaren. But Hamilton was unable to pull away and he was the first to pit, doing so a couple of laps earlier than Raikkonen, while Alonso took on less fuel with the quick stop putting him in the lead ahead of the Finn. But the positions were reversed after the second pit stops thanks to some very quick laps from Raikkonen. It was an important moment in the championship as he had reduced the gap to the leader Hamilton to 18 points, eventually going on to take the Drivers’ crown in a thrilling finale at the last round.