In an age where pit stop calamity is measured in tenths of a second and in which the loss of any more than that results in a yawning chasm of time that not even the greatest driver can claw back, the mere idea that a driver might drop over a minute to his rivals and still overhaul them to claim not only victory but also a record fifth title on the world’s most demanding track is the stuff of fantasy.

Unless of course it’s 1957, F1 is less rocket science and more bomb-on-wheels and you’re quite possibly the greatest driver who ever lived.

By the time Juan Manuel Fangio arrived at the Nürburging in early August 1957 he was already acclaimed as F1’s maestro and despite his advancing years – he was a comparatively ancient 46 – the man known as El Chueco (the crooked one) due to his bow-legged gait, was the defending champion and a mighty force to be reckoned with.

He’d also migrated from Ferrari to Maserati, to once again drive the Italian marque’s 250F. First introduced in 1954 and later reckoned by Stirling Moss to be of the best balanced cars he’d ever raced, the 250F had reached its apogee by 1957 and Fangio had already marched to three wins, on home soil in Argentina, in Monaco and at the French Grand Prix at Rouen. The German Grand Prix at the fearsome Nürburgring, however, would test man and machine to the limit, especially the man.

The event began with Fangio continuing the form he’d shown earlier in the year. In qualifying he flung the 250F around the 23km track with abandon, posting a best lap of 9 minutes 25.6s, shattering his own lap record of the previous year by a whopping 16 seconds. Ferrari’s Mike Hawthorn, 18 years younger than Fangio and one of the sport’s coming chargers, gritted his teeth and mounted an assault on Fangio’s time, but to no avail. He crossed the line almost three seconds behind the old man but would line up on the front row alongside Ferrari team-mate Peter Collins and Maserati’s Jean Behra. 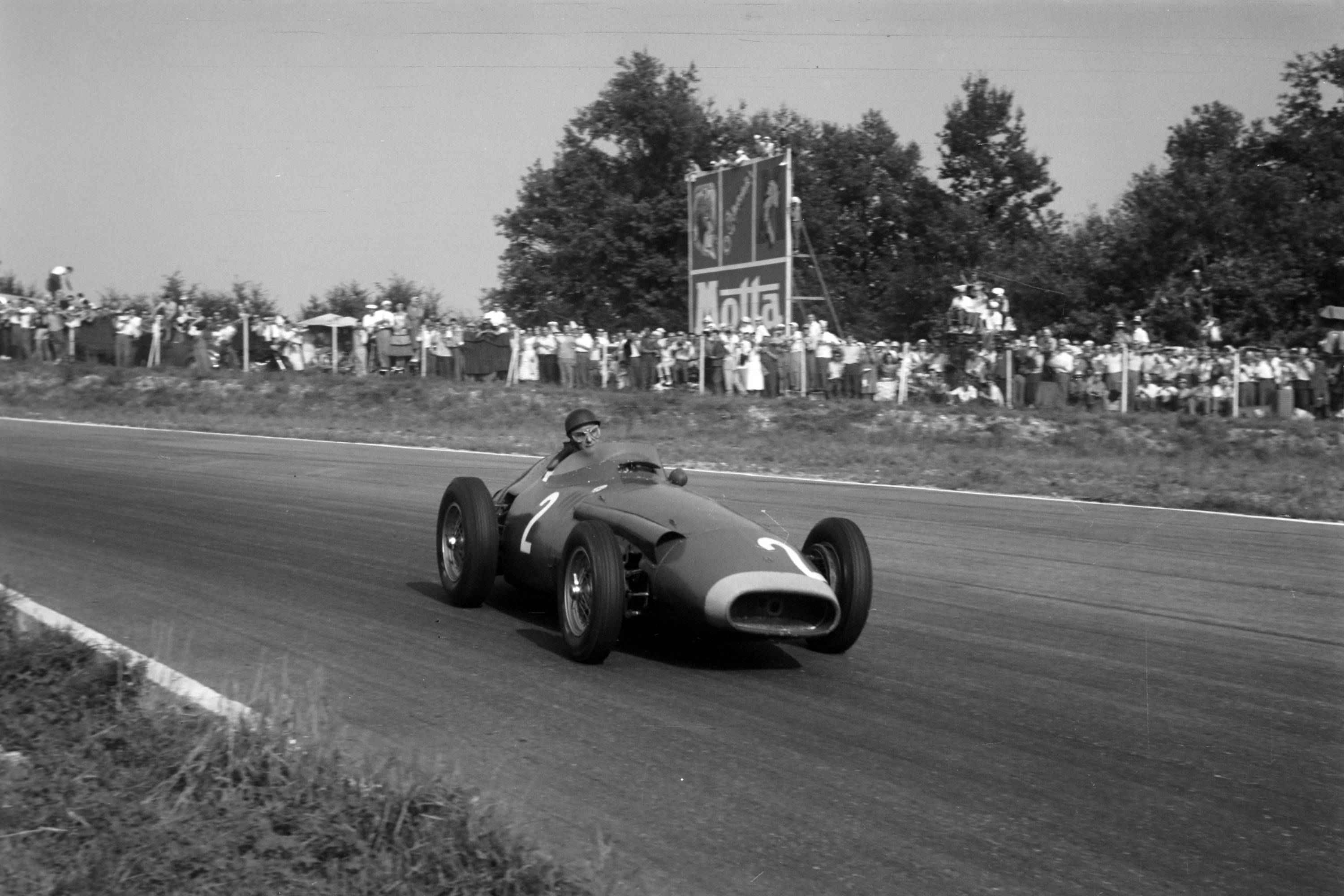 Juan Manuel Fangio behind the wheel of his Maserati 250F at the 1957 Italian Grand Prix. Image courtesy Motorsport Images

With the grid order decided and Fangio’s first task of the weekend complete, the teams retired to the paddock for further tinkering while in a move unthinkable now, the organisers opened the track to allow the public to throw their VWs and motorcycles around.

In the paddock Fangio and Maserati debated race strategy. Noticing excess tyre wear they alighted on a plan to pit the Argentinian during the race for fresh rubber. It was a decision that would result in perhaps the greatest comeback drive in grand prix history.

At the start of the race Hawthorn and Collins powered ahead of Fangio to take the top two positions. But the pace of the Ferraris was initially no match for the old warrior and on lap three of the 22 Fangio passed Collins and Hawthorn. By lap eight he was a monstrous 28 seconds in front of Hawthorn and had claimed a new lap record of 9m30.8s and on lap 10, as team-mate Behra pitted, Fangio lowered the benchmark by another second. 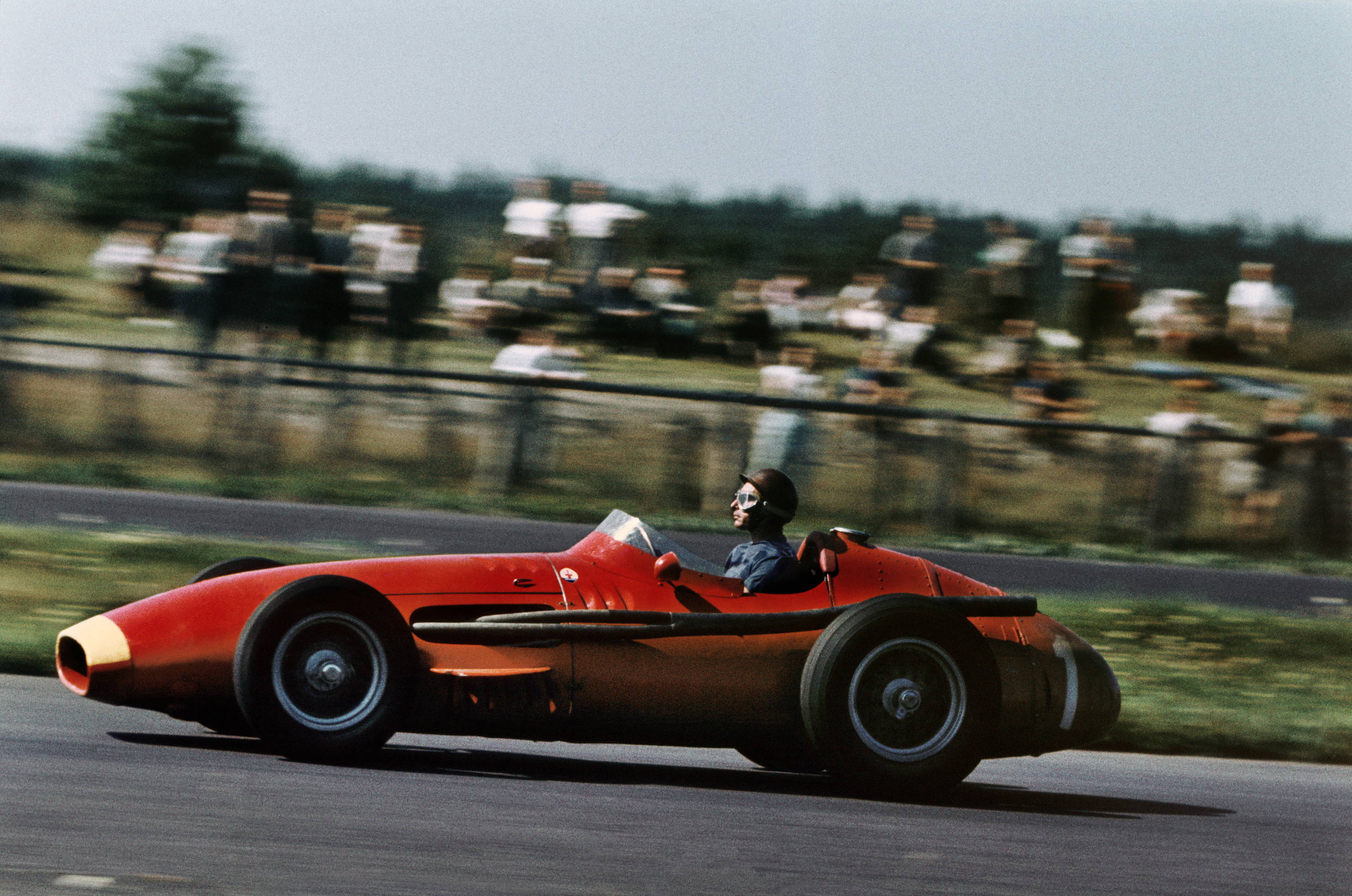 Juan Manuel Fangio behind the wheel of his Maserati 250F at the 1957 German Grand Prix. Image courtesy Motorsport Images

Two laps later it was Fangio’s turn to stop for new tyres. He steered his 250F into the pits and disaster struck. With hammers ringing at the dinner plate-sized wheel nuts, the Maserati mechanics took what Motorsport magazine writer Denis Jenkinson called a “disgustingly long” 52 seconds to get Fangio switched and fuelled. The Ferraris roared by and by the time the Argentinian was pushed away from the pits he was over 40 seconds adrift of his rivals. He had an Eifel mountain to climb.

Fangio initially laboured and after 15 laps had made little or no impression on the gap. But as his full tanks drained and his tyres came to life he began to take chunks out of the deficit. On lap 16 he was 33 seconds behind. Over the next 23 kilometres he carved seven seconds from the deficit and began to pummel the lap record. Nine minutes 28 seconds became 25s, then 23 and on lap 19 he dropped the record to 9m23.4s. The gap was just 13.5 seconds. 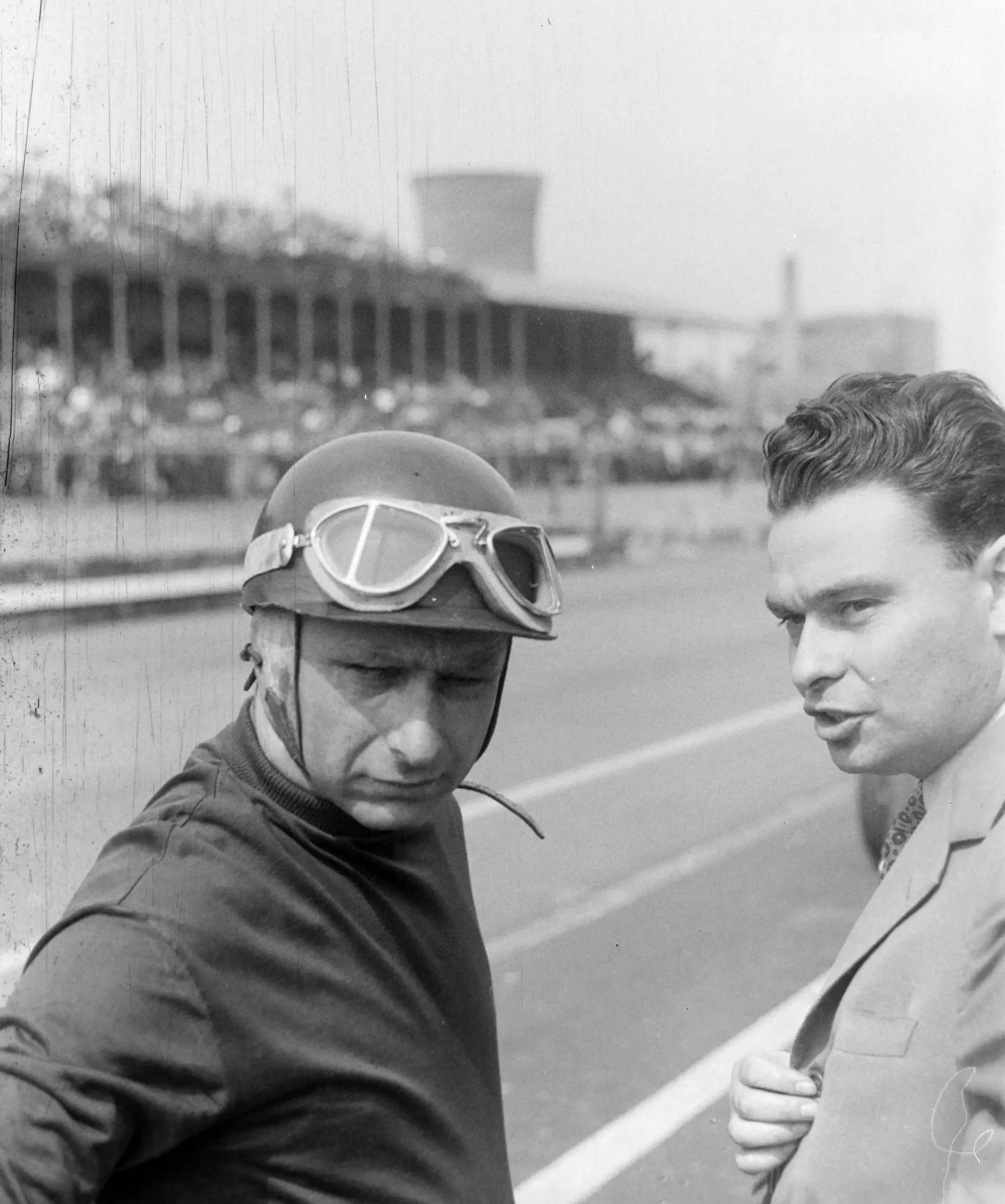 “I had to risk – that's something I never did before in my life. I started to switch from using fourth gear to fifth. I started to pull stronger using the longer gears. And I thought, maybe once is OK, I can take one turn like this – but it's crazy if I take two... The car went better into the turns. Then there is much more risk, this is much less safe, but you go faster.

“Then in one of the downhills I saw the other two cars; they were one behind the other. There were only two laps to go. And that was the first moment that I really thought I could get them.”

On lap 20 Fangio closed in. And as Jenkinson reported: “Round the Sudkerve he was grinning contentedly at the two young boys and as Collins went into the left-handed Nordkerve Fangio went by him on the inside.”

The news that Fangio has passed one Ferrari was hugely impressive but when the announcement was made that the Maserati driver had lapped in in 9m17.4s to gain a monumental 11 seconds on Hawthorn it became clear that victory was in sight. And with just over a lap to go, Fangio did it, powering past the remaining Ferrari obstacle as they thundered down to the lowest part of the course at Breidscheid. 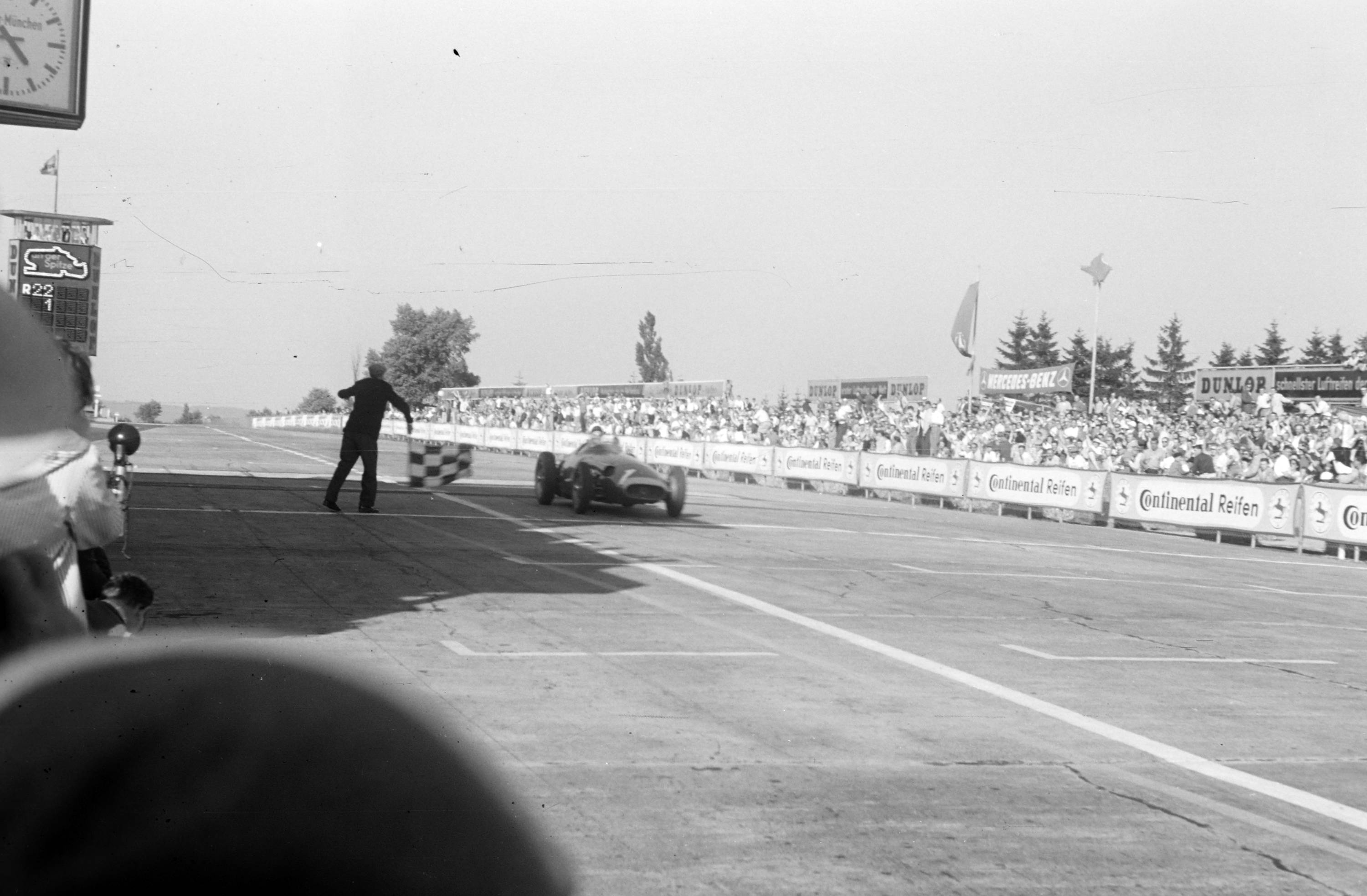 Juan Manuel Fangio behind the wheel of his Maserati 250F, crossing the line in 1st position at the 1957 German Grand Prix. Image courtesy Motorsport Images

“I've never been a spectacular racer, but I did things I had never done in my life, driving from one side of the circuit to the other, using the maximum revs. And that's how I caught them and won the race; I won by 3s. I made record laps in the last 10 laps,” Fangio told Autosport of the incredible drive that sealed his fifth championship.

It would be Fangio’s final win. He would take two more podiums in 1957, at Pescara and Monza, and race twice in 1958 but that August day at the Nürburgring would endure as a more fitting farewell, a drive of monumental skill, commitment and courage. It was one he said he would never better. 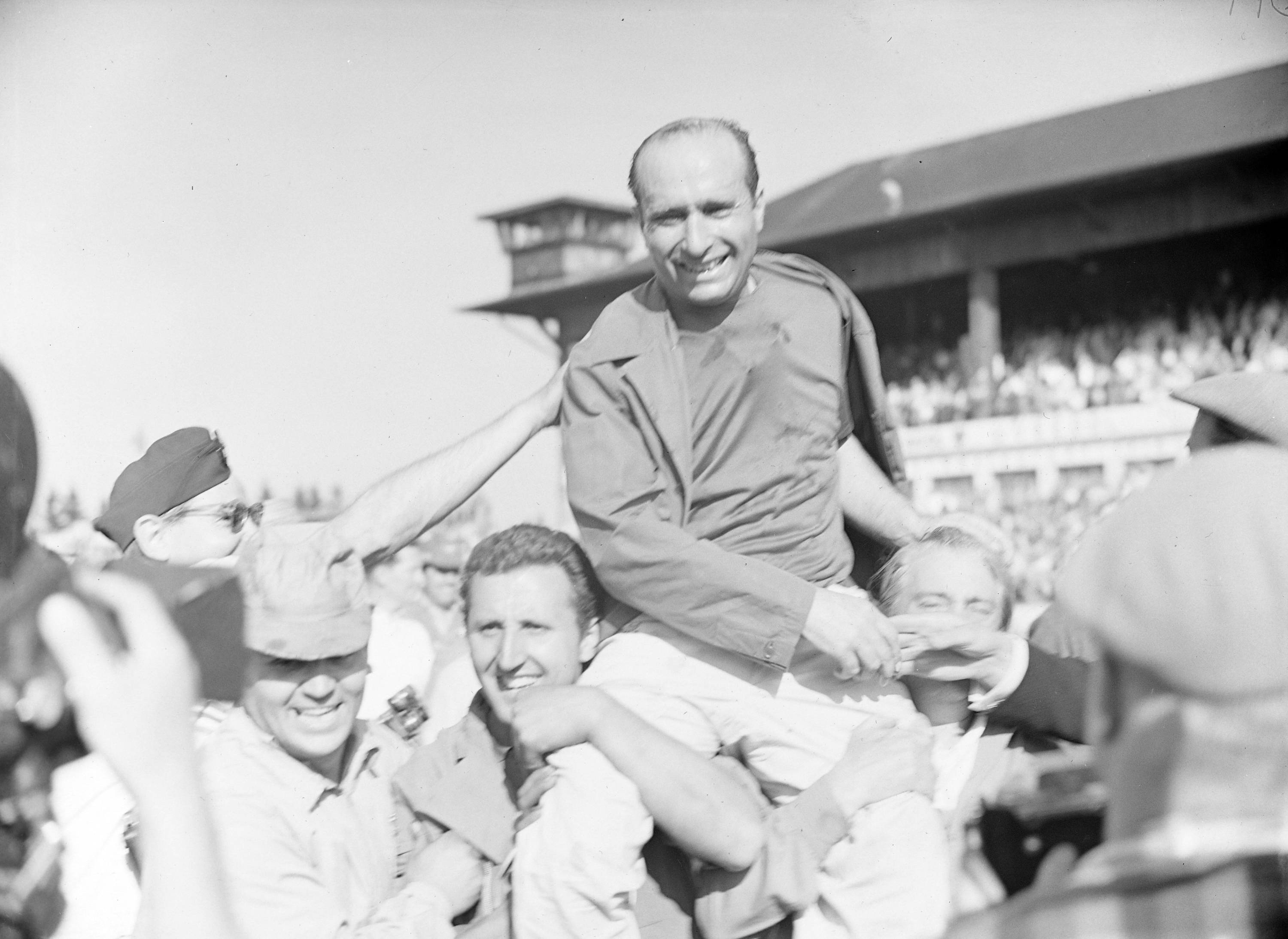 "When it was all over I was convinced I would never be able to drive like that again - never," he said. "I had reached the limit of my concentration and will to win."