More than Snow-Play: The Story Behind the Trans Antarctic Expedition

Prior to the 1955-58 Commonwealth Trans Antarctic Expedition (CTAE), no other expedition had ever successfully crossed the Antarctic continent via the South Pole. Read about the difficulties that explorers Sir Vivian Fuchs, and Sir Edmund Hillary faced as they braved the world's harshest climate. 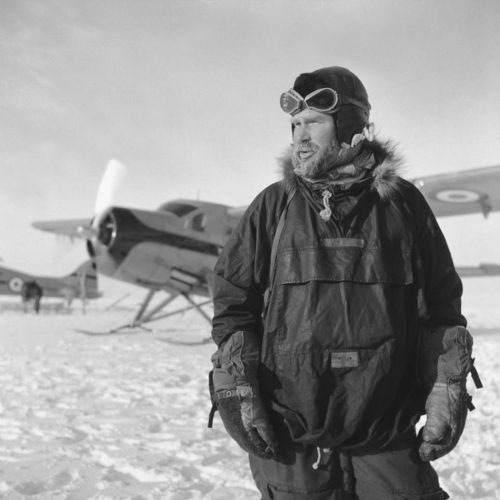 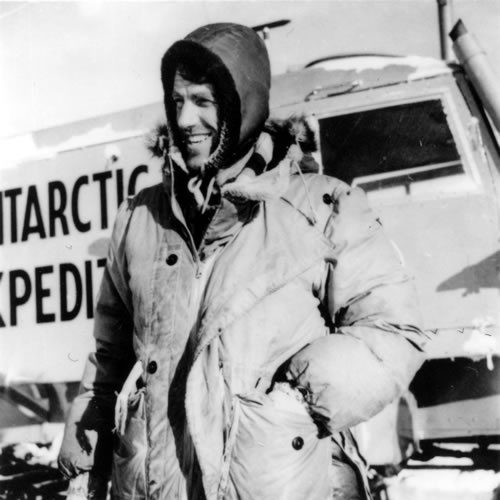 Although the CTAE was not the first Antarctic Expedition - it was preceded by two others, the notorious Amundsen and Scott expeditions, both in the early 1910s - it was the first joint-private venture by the United Kingdom, the United States, New Zealand, Australia and South African governments. In keeping with the “Heroic Age” of exploration, part of the CTAE’s purpose was to carry out scientific research. This included seismic soundings and gravimetric readings, which were done by the New Zealand and UK parties as part of the International Geophysical Year (IGY). Along with a few other vehicles, the Tucker Sno-Cat was selected as the primary vehicle by Transport & Engineering Officer David Pratt, after hearing about the success Tucker had with the military during/after the second World War. 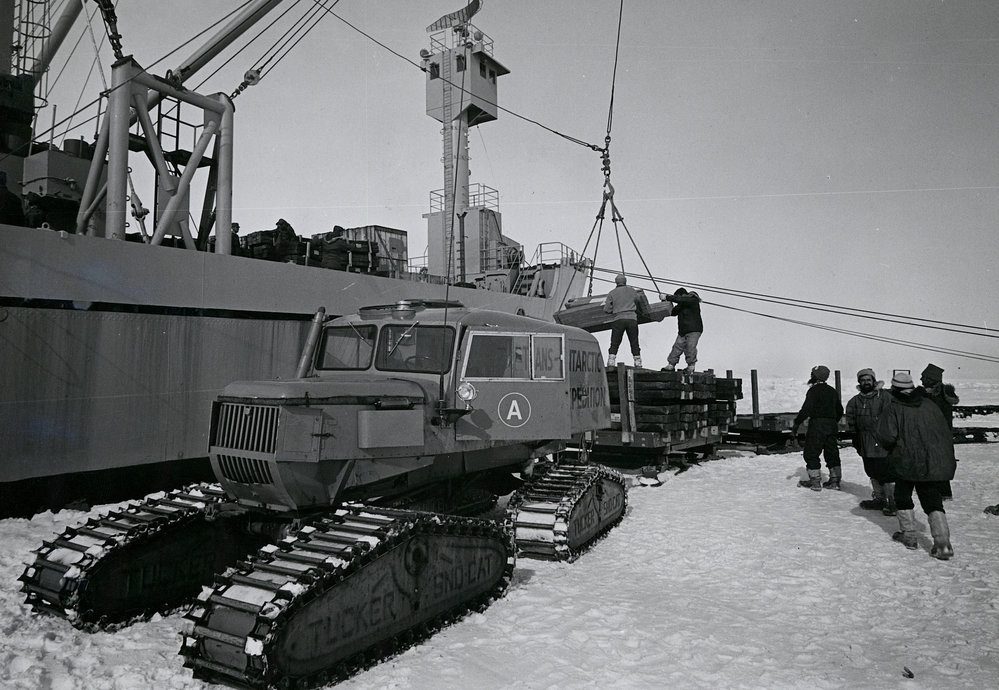 Before the land expedition began in ‘56, Fuchs sailed to Antarctica onboard the Theron  with a team of other men to establish camp at Shackleton Base, the UK team’s starting point. But before the vessel could make landfall, the Theron became trapped in the ice, only to be freed by an Auster observation plane.

Once the eight-man crew established camp, and with Fuchs’ departure for more mainland preparation, they were tasked with bringing supplies ashore from Ice Bay. But with winter approaching and blizzard-like conditions pushing temperatures as low -30 °C ( -22 °F), the men were forced to take shelter, abandoning the majority of the supplies they had brought. Lasting more than a week, the blizzard had broken off the Ice Bay, taking all the remaining supplies with it. With the food, fuel, housing materials, and transport lost to the sea, the men resorted to hunting seals to survive. 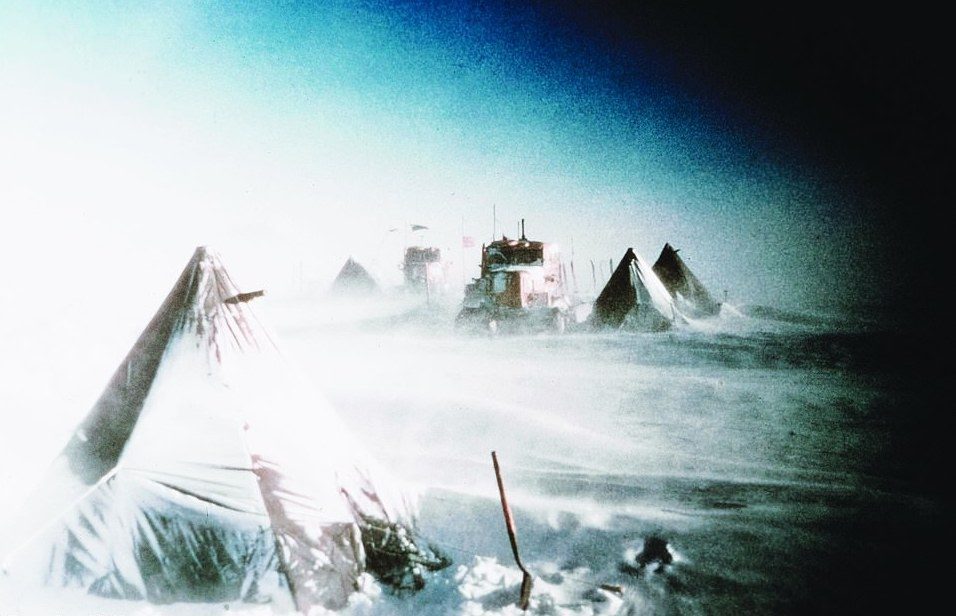 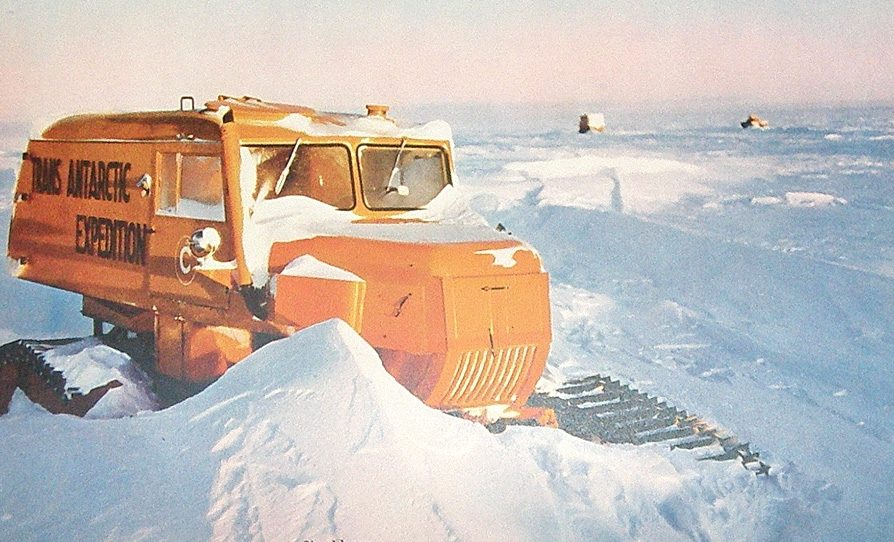 After Fuchs returned in December of 1956, bringing with him more supplies, the crew completed the establishment of the Shackleton Base and began preparing for their expedition. At the same time, Hillary’s team set up the Scott Base; on the opposite side of the continent at McMurdo Sound by the Ross Sea; this was where Fuchs and his team would end their Trans Antarctic journey. Hillary’s team was also responsible for preparing the path and caching supplies along it for Fuchs’ team on the Skelton Glacier and across the Polar Plateau toward the South Pole. 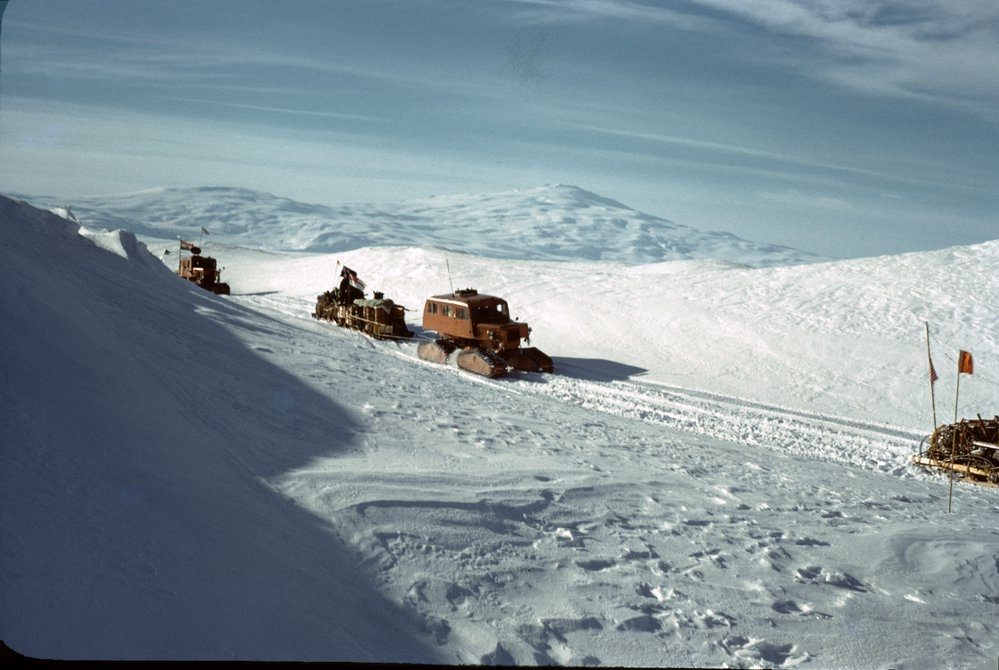 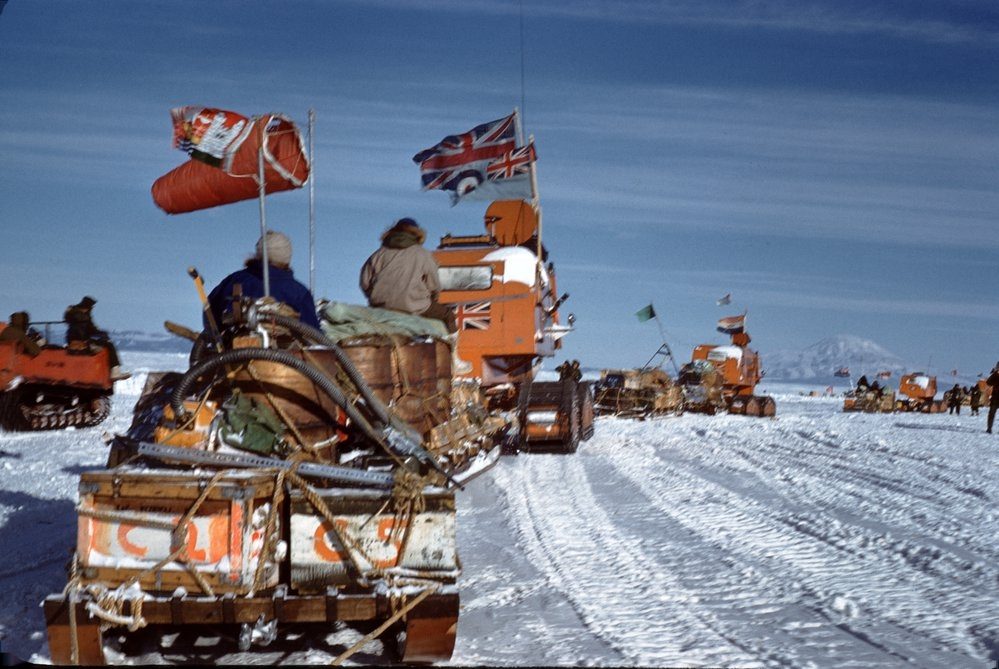 Although Hillary had not intended to travel as far as the South Pole, after laying the supply depots he saw the opportunity to beat Fuchs and the British team to it. In the late evening on January 3, 1958, Hilliary and his team had the South Pole in their sights. The next morning they pulled up to the US Amundsen–Scott South Pole Station; they had made it to the South Pole. Hillary's arrival to the South Pole marked the first party to reach the South Pole overland since the Scott Expedition in 1912, and the first to reach it in motorized vehicles. 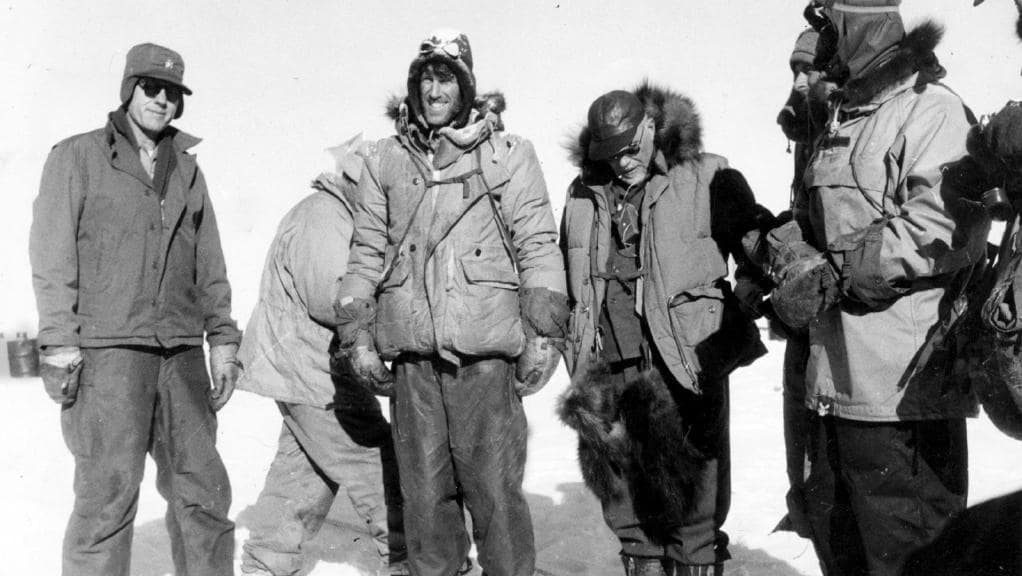 Sixteen days later, Fuchs and his team arrived at the South Pole, meeting Hillary from the opposite direction. Fuchs and the rest of the team then continued along the route Hillary’s team had laid, while Hillary flew back to Scott Base; he would later re-join Fuchs for the last leg of the overland journey. The entire party arrived at Scott Base on March 2, 1958, having completed the first successful Trans Antarctic crossing of 3,473 km (2,158 miles) of unexplored snow and ice in just 99 days. Automobilist spoke with Tucker Sno-Cat® Corp, located in Medford, Oregon, USA to discuss the vehicle that ferried Hillary and Fuchs across Antarctica.

Automobilist: How was Tucker Sno-Cat selected for the Commonwealth Trans Antarctic Expedition?

Tucker: David Pratt, Transport & Engineering Officer of the Expedition, selected the Tucker Sno-Cat. He had heard about us through the success we were having with the military.

Automobilist: What sort of modifications were made to the 743 to allow it to operate in the Antarctic?

Automobilist: What was the total horsepower of the 743?

Tucker: With a two-barrel carburettor 180 hp.

Tucker: We don’t have a tow weight exactly, but we know the sleds they pulled were over 4,000 pounds each and they pulled more than one most of the way because the other vehicles could not handle the weight. And, we know that the cat itself had a large load.

Automobilist: Well thank you so much! We appreciate all the information and assets you've provided for us. We are looking forward to the release of the article / Design Poster, and we hope you enjoy it! 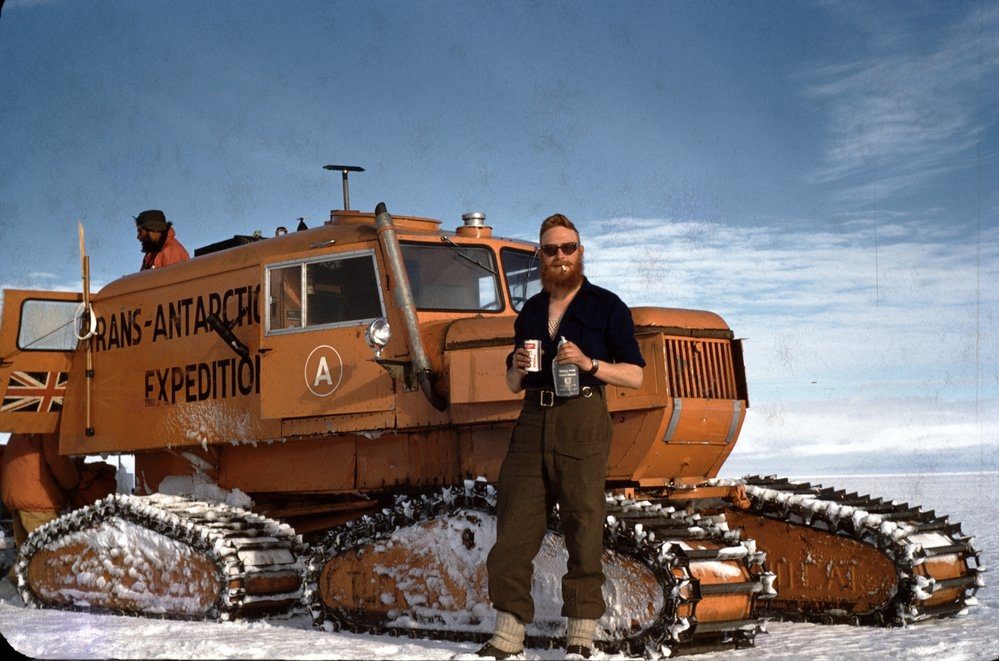 To celebrate the achievements of Sir Vivian Fuchs and Sir Edmund Hillary, Automobilist has created a Design Poster of the Tucker Sno-Cat. You can get the Trans Antarctic Expedition Design Poster during Automobilist's 2019 Christmas Promotion. 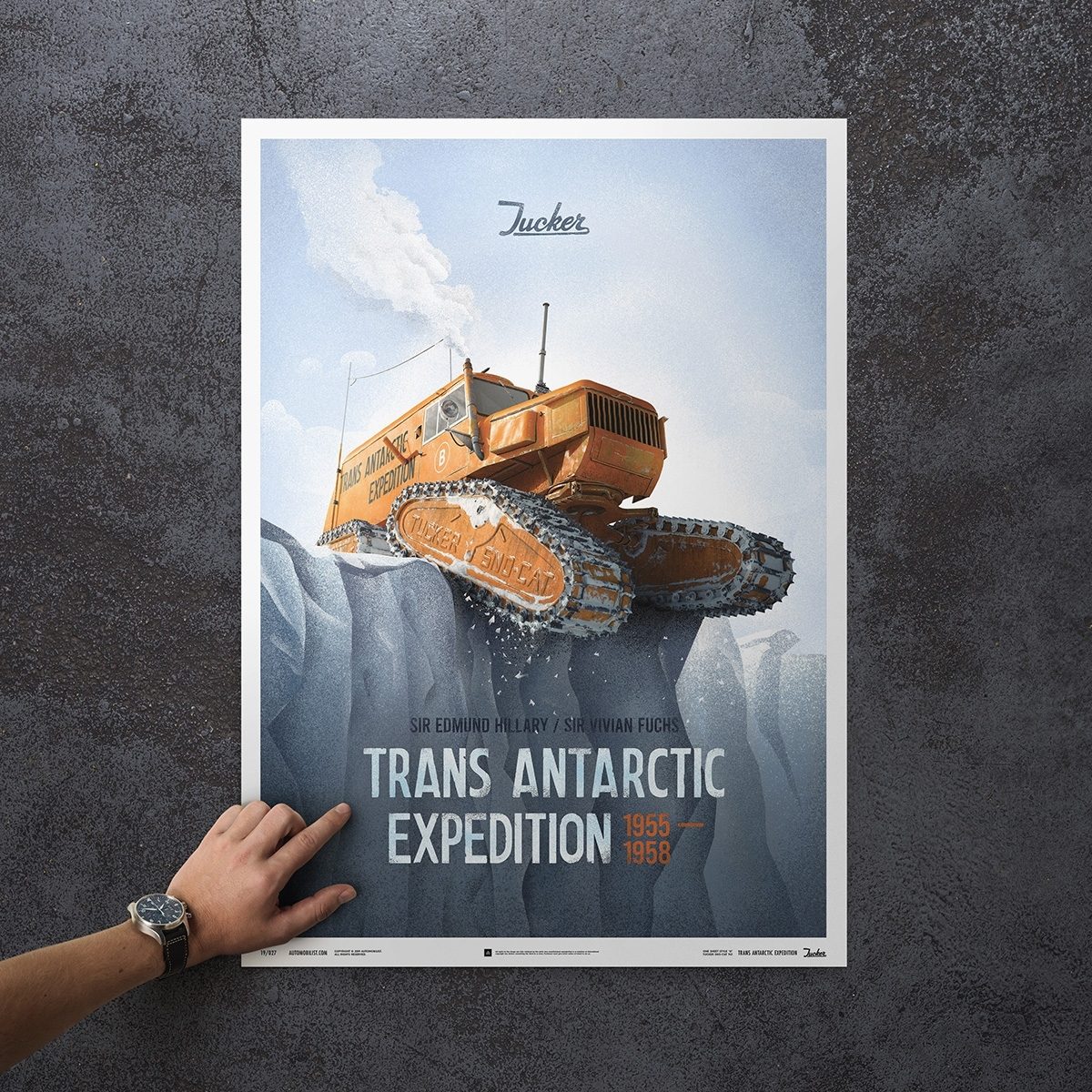