Embossed in silver, each poster is uniquely numbered, is accompanied by a hologram mark of authenticity and features the names of the drivers who won the world championship title in that ten-year period. Each poster features the stand-out car that best encompassed what Formula 1 represented at the time.

About the Decades and the corresponding Posters

The 1950s poster features the Maserati 250F as driven by five-times world champion Juan Manuel Fangio. For the ‘60s we have selected Jim Clark’s Lotus 25, while the ‘70s artwork shows Automobilist brand ambassador Sir Jackie Stewart in the striking Tyrrell 006. There could only be one choice for the 1980s design, which pictures Ayrton Senna in the McLaren MP4/4. Who else but Nigel Mansell and his “Red 5” Williams FW14B to represent the ‘90s? The most successful driver of all time, Michael Schumacher and his seven world championship crowns features in the F2002 for the 2000s design. Two men dominated the scene in the last decade, as Sebastian Vettel  gave Red Bull Racing four consecutive titles before Lewis Hamilton won five in six years. The Mercedes-AMG F1 W10 EQ Power+ was so dominating in the 2019 season, winning 15 races, including 11 for Hamilton on his way to his sixth title. Their success meant that Mercedes have won every single title since the sport’s new hybrid power unit formula was introduced in 2014.

For Highlights of Each Decade, Scroll Below: 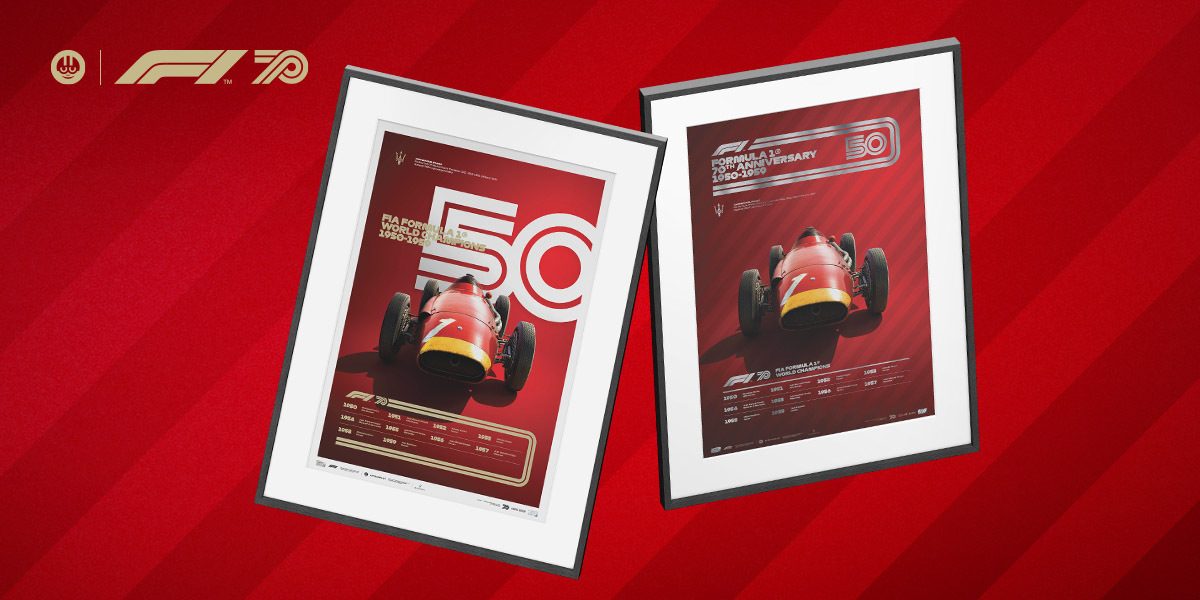 1950 prints of the Limited Edition 1950s Maserati design poster will be available, along with 700 Collector’s Edition exclusively co-created by the Maserati team for the 70th anniversary celebrations. 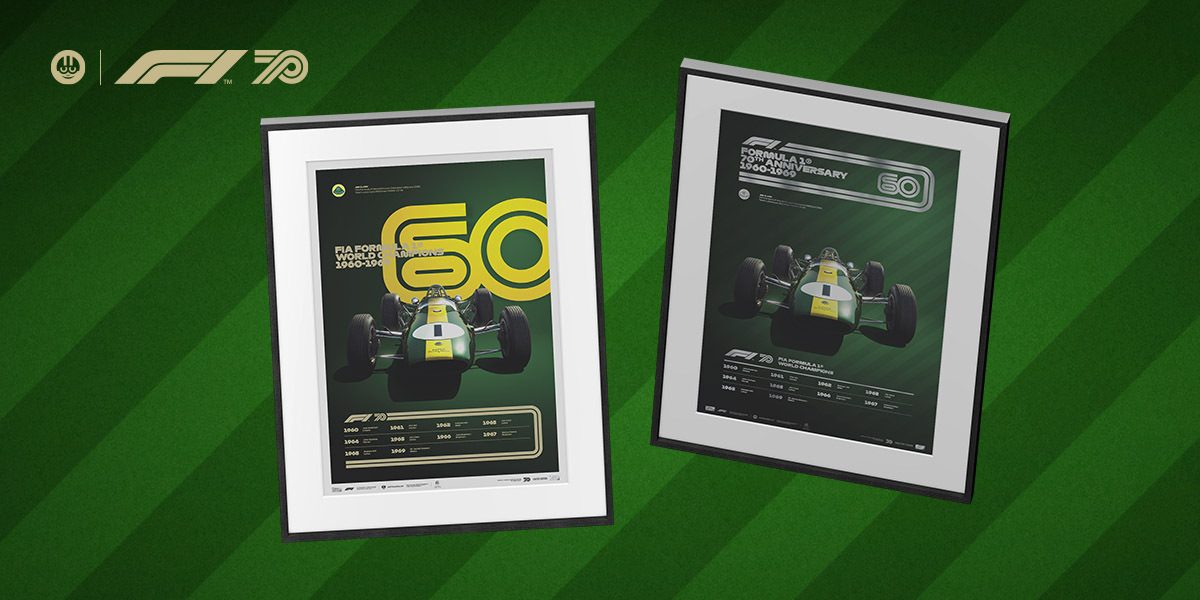 In the Sixties, Formula 1 had its own revolutionary and his early masterpiece would run riot on the race tracks of the world.  The man was Colin Chapman and the masterpiece was his 1962 creation, the Lotus 25 Formula 1 car. Chapman and Team Lotus were part of the English “garagiste” movement that countered the hugely powerful but heavy cars built at the time by Ferrari and Maserati, by producing less powerful but lighter and more agile mid-engined machines. That pursuit of paring weight meant that Lotus cars were sometimes fragile and although Jim Clark took pole position at six of the nine races in 1962, winning three of them, including his maiden F1 victory at Spa-Francorchamps in the Belgian GP, he missed out on the championship crown. There was no doubt the following year when the mercurial Scotsman at the wheel of the Lotus 25 romped to his first world title, beating Graham Hill by 73 points to 29. The Lotus 25 had a long life and Clark used it to win three more races in 1964.

1960 prints of the Limited Edition 1960s Lotus design poster will be available, along with 700 Collector’s Edition exclusively co-created by Classic Team Lotus for the 70th anniversary celebrations. 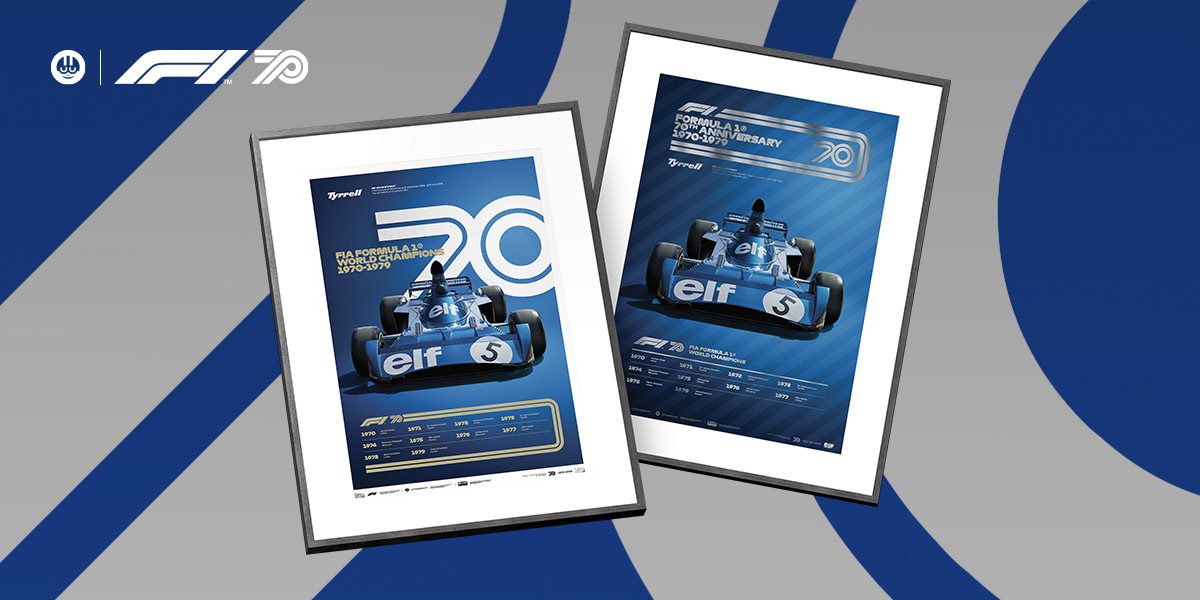 Formula 1’s third decade, the 70s, saw commercial sponsorship really take off, so that a rather exclusive minority interest sport became a big business and the drivers were established as sporting superstars. The stars of the 1973 season were Jackie Stewart and his car, the Elf Tyrrell-Ford 006 car. Tyrrell, founded by Ken Tyrrell, started racing in 1958 and started building its own cars in 1970. The team experienced its greatest success in the early 1970s, when it won three Drivers' Championships and one Constructors' Championship with Jackie Stewart. “Uncle Ken” as Tyrrell was affectionately known throughout the F1 paddock, passed away at the age of 77 in 2001 with this tribute from Sir Jackie Stewart: “He made a great contribution to British motorsport and was a man of the highest standards of integrity and ethics.”

1970 prints of the Limited Edition 1970s Tyrrell design poster will be available, along with 700 Collector’s Edition exclusively co-created with the Tyrrell family for the 70th anniversary celebrations. 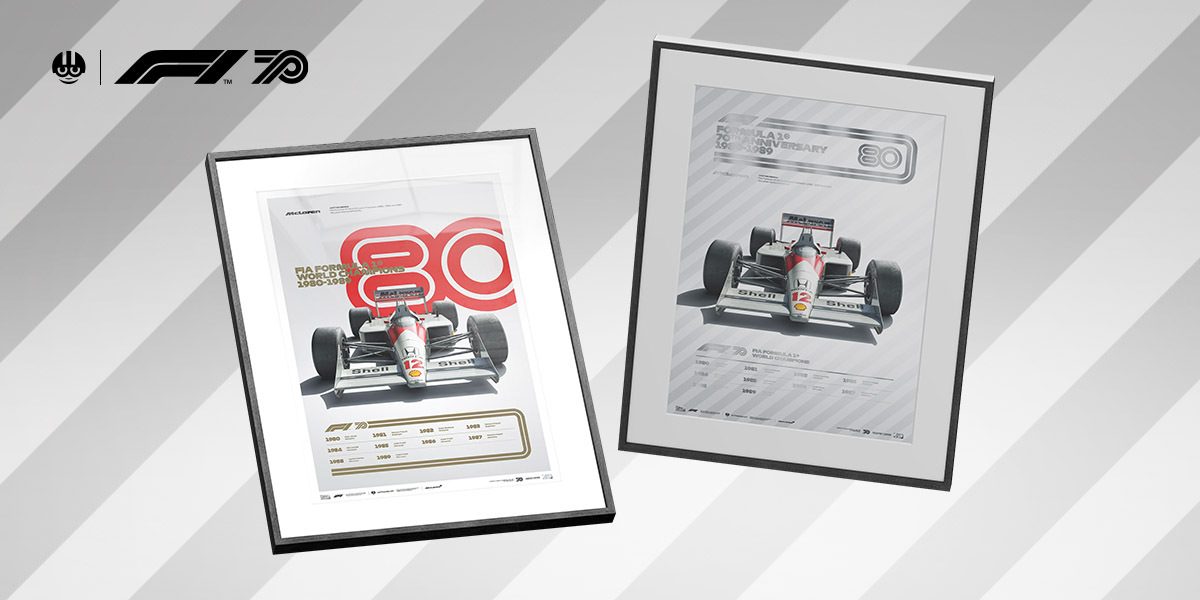 The McLaren MP4/4 is statistically the most successful Formula 1 car of all time, having triumphed in 15 out of the 16 Grands Prix held in 1988. That’s a 93.8 winning percentage and many of those victories also saw its drivers Alain Prost and Ayrton Senna take one-two finishes. Naturally, it won both the Drivers’ (with Senna) and Constructors’ World Championship titles that year. However, perhaps the number that sums it up best is 27 - that’s the number of laps the car was not in the lead of a race over the course of the entire season! Come the end of the year, the car had amassed a total of 199 points, three times more than the second best team in the Constructors’ classification. A decade of dominance!

1980 prints of the Limited Edition 1980s McLaren MP4/4 design poster will be available, along with 700 Collector’s Edition exclusively created with extensive inputs from McLaren for the 70th anniversary celebrations. 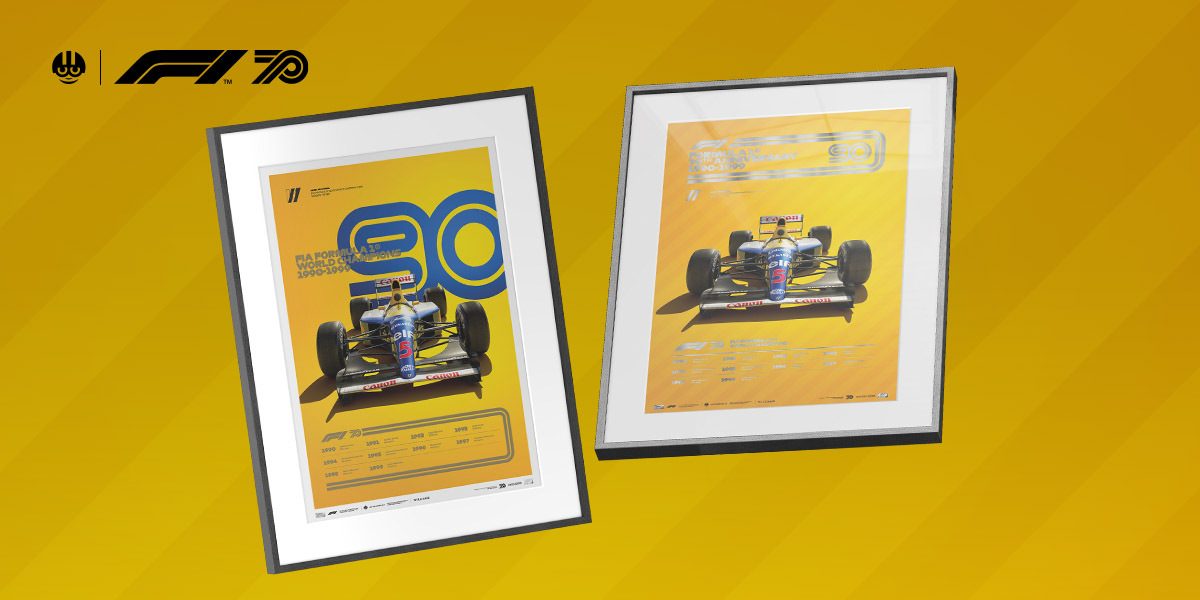 Motor sport has always been an early adopter of new tech and the FW14B which Williams raced in 1992 was by far the most complex Formula 1 car ever seen at the time. It was the first car to really challenge the concept that only the driver in the cockpit should have full control. The car was an evolution of the previous season’s FW14 and it boasted an impressive collection of bells and whistles including a semi-automatic gearbox, a sophisticated blown diffuser to generate downforce, traction control, data logging and, most important of all, electronically controlled active suspension. Clever as it was, the FW14B still needed someone capable of driving it. Step forward Nigel Mansell, the team’s undisputed Number 1, with Italy’s Riccardo Patrese destined to ride shotgun for the Englishman.

1990 prints of the Limited Edition 1990s Williams design poster will be available, along with 700 Collector’s Edition exclusively co-created by the team at Williams for the 70th anniversary celebrations. 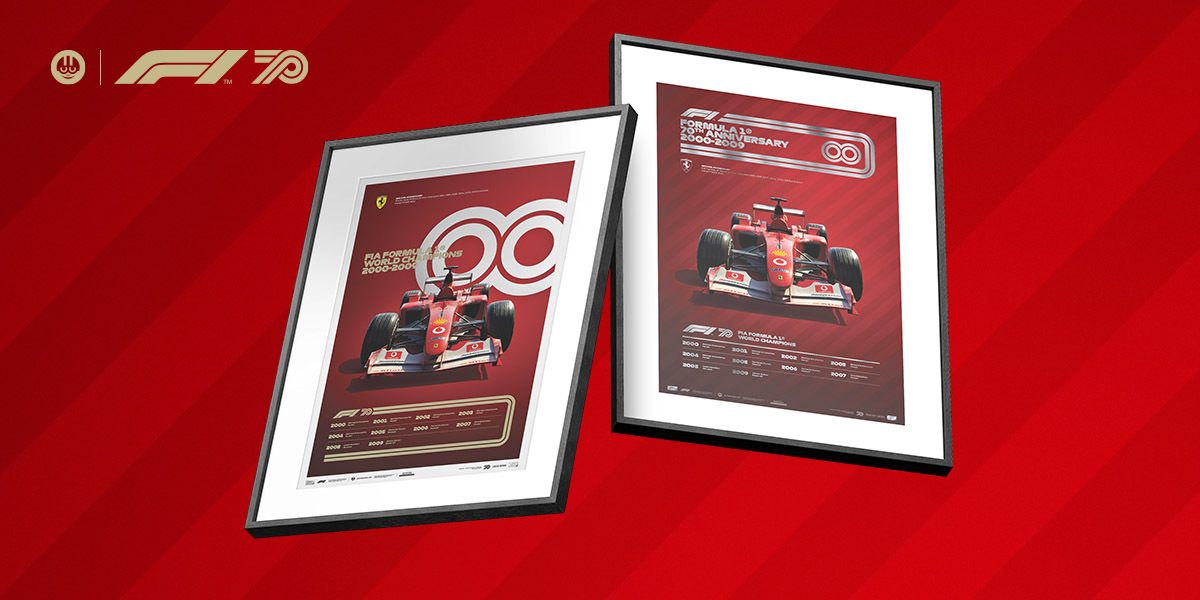 Scuderia Ferrari could have been the subject of the featured car in every single one of Automobilist’s series of commemorative posters for each decade of the Formula 1 World Championship, as the Italian outfit is the only team to have taken part in the series every year since 1950 to the present day. Its 2002 challenger, the F2002 is one of the most successful cars in the history of Formula 1. Though it’s statistical record is slightly complicated by the fact it did not race until the third round of that year’s championship, it was still the team’s weapon of choice up to and including the fourth round of the 2003 season, taking its final win at that year’s San Marino Grand Prix. Its final hit rate was a score of 15 wins from 17 race starts.

Ferrari fans are in for a treat with 2000 uniquely numbered pieces of the Limited Edition 2000s Ferrari design poster available for purchase, along with 700 Collector’s Edition exclusively co-created by the Ferrari team for the 70th anniversary celebrations. 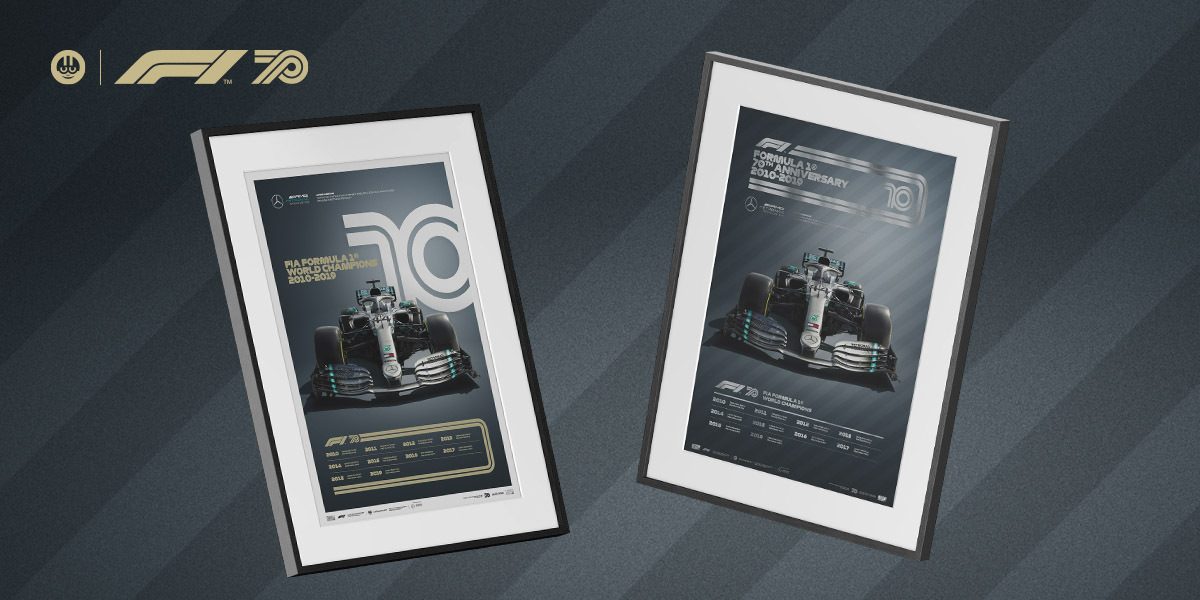 Recently, the team doing most of the Winning

Mercedes’ history in Formula 1 dates back to the Fifties, but it’s not a particularly long story: It won two world championships in 1954 and ’55, the era which gave rise to it being known as the Silver Arrows team and then returned as an engine supplier in 1994. It was not until 2010 that ‘Mercedes’ once again became an actual team name. And the new hybrid age of Formula 1 could now be referred to as the “Mercedes era”.

2010 prints of the Limited Edition 2010s Mercedes-AMG Petronas F1 Team design poster will be available, along with 700 Collector’s Edition exclusively co-created by the team at Mercedes for the 70th anniversary celebrations. 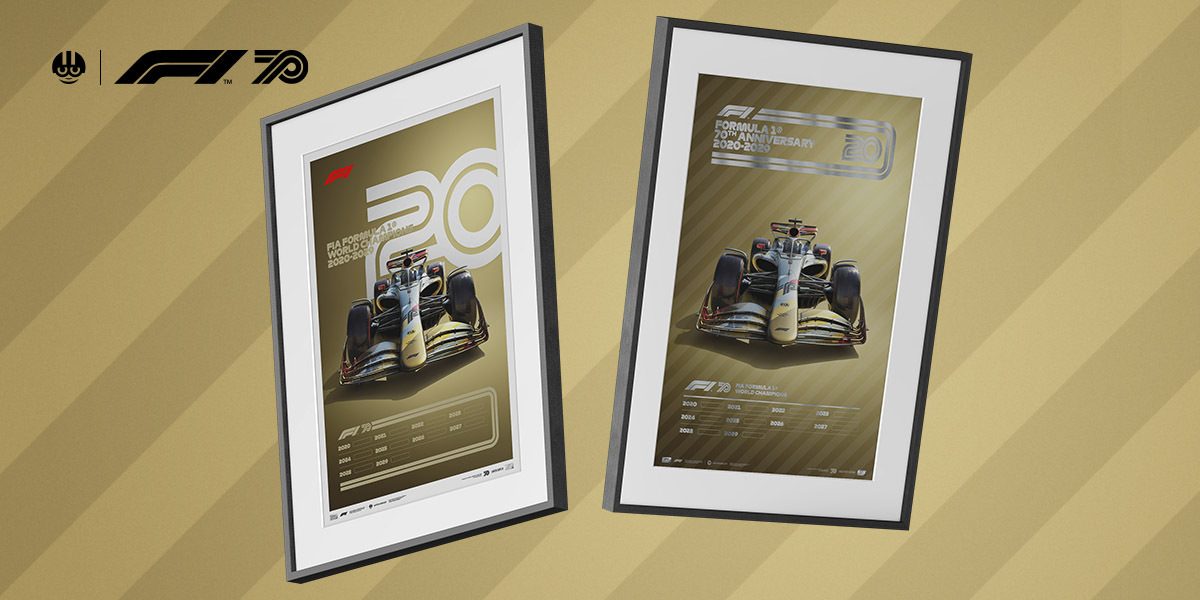 The final poster in the collection features a car that might look unfamiliar to even the most ardent racing fan, because it does not actually exist yet! It represents a F1 car of the future with the design that was originally due to be introduced for the start of the 2021 season, based on a radical shake-up of the regulations. However, due to the current Covid-19 pandemic, these exciting changes have been delayed until 2022. There is room on this edition for fans to fill in the champions through the 2020s themselves as F1 looks forward to its most exciting decade yet.

To read more about the regulations and livery of the future, click here.