Racing in the 70s

If Formula 1 could be said to follow fashion then the racing style that had largely defined the 1960s – all Mod-ish tapered edges, size zero waistlines and perfectly sculpted silhouettes – gave way to a decade in which extravagance was a virtue and where innovation meant going bigger and bolder than anyone else.

Welcome to 1970s Formula 1 where the cars were as luxuriantly glamorous as Emerson Fittipaldi’s sideburns and as chicly engineered as Jackie Stewart’s drilled sunglasses. Here are the Me Decade’s finest F1 cars…

No car embodied the louche cool of the early ‘70s like the Lotus 72. At its most beautiful when draped in the devilishly handsome black and gold livery of its tobacco sponsor, the 72 was arguably the greatest car of the decade.

With the Lotus 49 reaching the end of its potential development in the late 1960s Colin Chapman and Maurice Philippe needed a new platform for success, a car that would set the technological pace for the new decade. The 72 did it in spades.

Radiators were mounted at the sides instead of at the front, the nose went flat and wide, rising to a rear end featuring a low, but massive rear wing. The cigar-shaped racing silhouette of the past 10 years disappeared overnight, replaced by the 72’s wondrous low-slung wedge. Using the same engine as its predecessor it was faster than the 49 and more agile.

By the time it bowed out with Ronnie Peterson’s fifth-place finish at the 1975 US Grand Prix, the Lotus 72 has taken part in 75 grands prix across an incredible six seasons. It won 20 of them, scored 17 pole positions and racked up a total of 39 podium finishes. Lotus raced it to three Constructors’ titles and the 72 delivered Drivers’ crowns to Jochen Rindt (posthumously) in 1970 and to Fittipaldi in 1972. 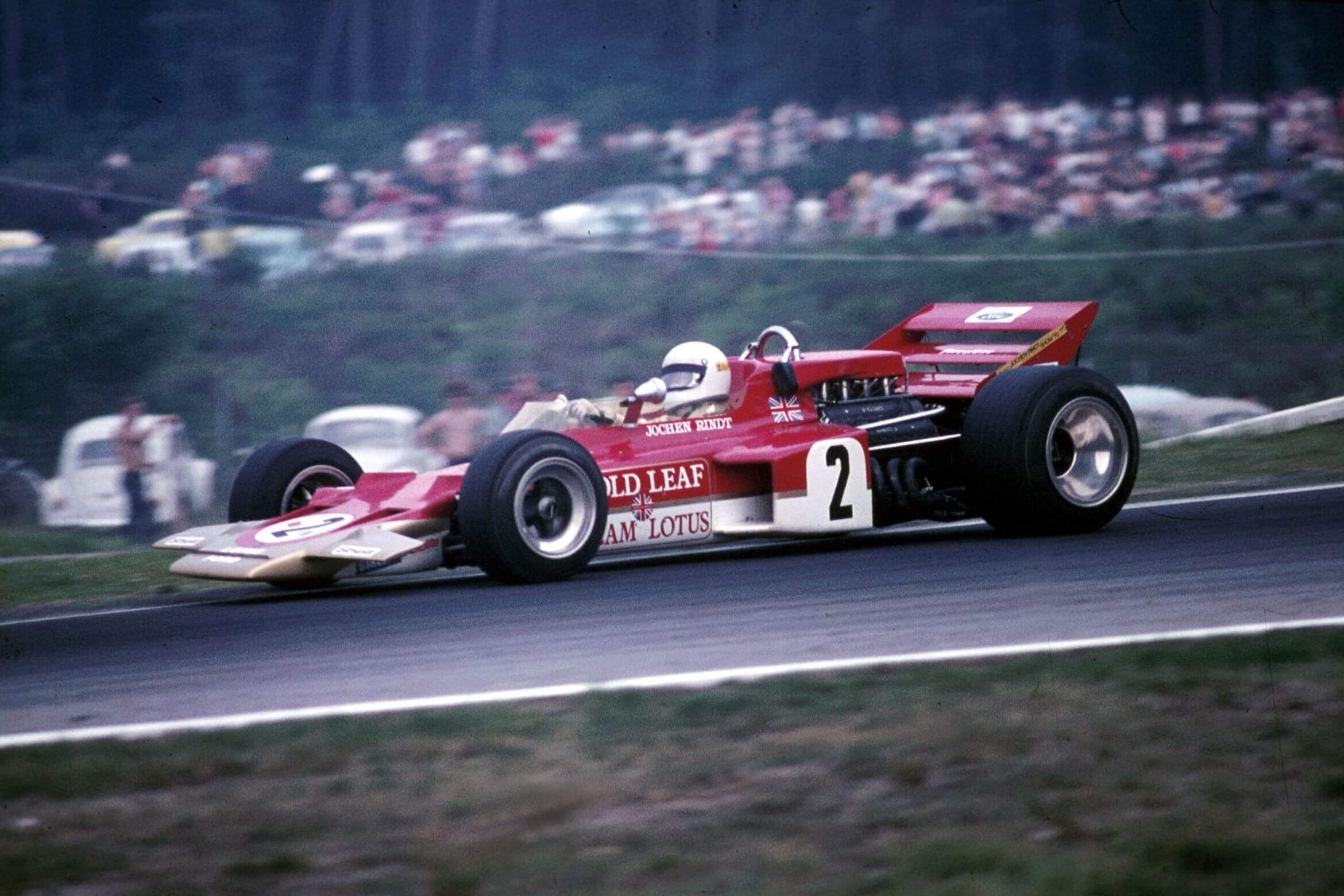 We could just as easily have plumped for the McLaren M23 here and certainly the McLaren was a more successful machine but the romance of the Tyrrell and its drivers, Jackie Stewart and François Cevert earned it the edge.

If the Lotus 72 was Led Zeppelin, an unstoppable behemoth thundering through ‘70s racing, then the little Tyrrell was the racing equivalent of the Rolling Stones in the early years of the decade – not quite at the cutting edge but often capable of trumping the opposition through a combination of svelte style and gritty nous. This was Exile on Main Street for the race track.

Derek Gardner designed the 001 for Ken Tyrrell at his kitchen table and in its first outing, at the Oulton Park Gold Cup, it showed, with Stewart ruled out of qualifying by technical woes and then hampered in the first race by a stuck throttle in the race and eventually halted by a piston failure. The car was taken to the Italian Grand Prix but again failed. Canada, the US, Mexico – the 001 failed at every race.

Gardner was not deterred, however, and as the next season progressed his design was refined with a more aerodynamic nose section, a higher airbox, a longer wheelbase (for François Cevert) and a narrower monocoque. The ugly duckling of 1970 swiftly morphed into a victorious swan and Tyrrell would finish on the podium nine times out of 11 races and hand Stewart a dominant second world title. So successful were the 002/003 that Tyrell ended the 1971 campaign with 73 points more than the combined total of BRM and Ferrari who finished second and third respectively. 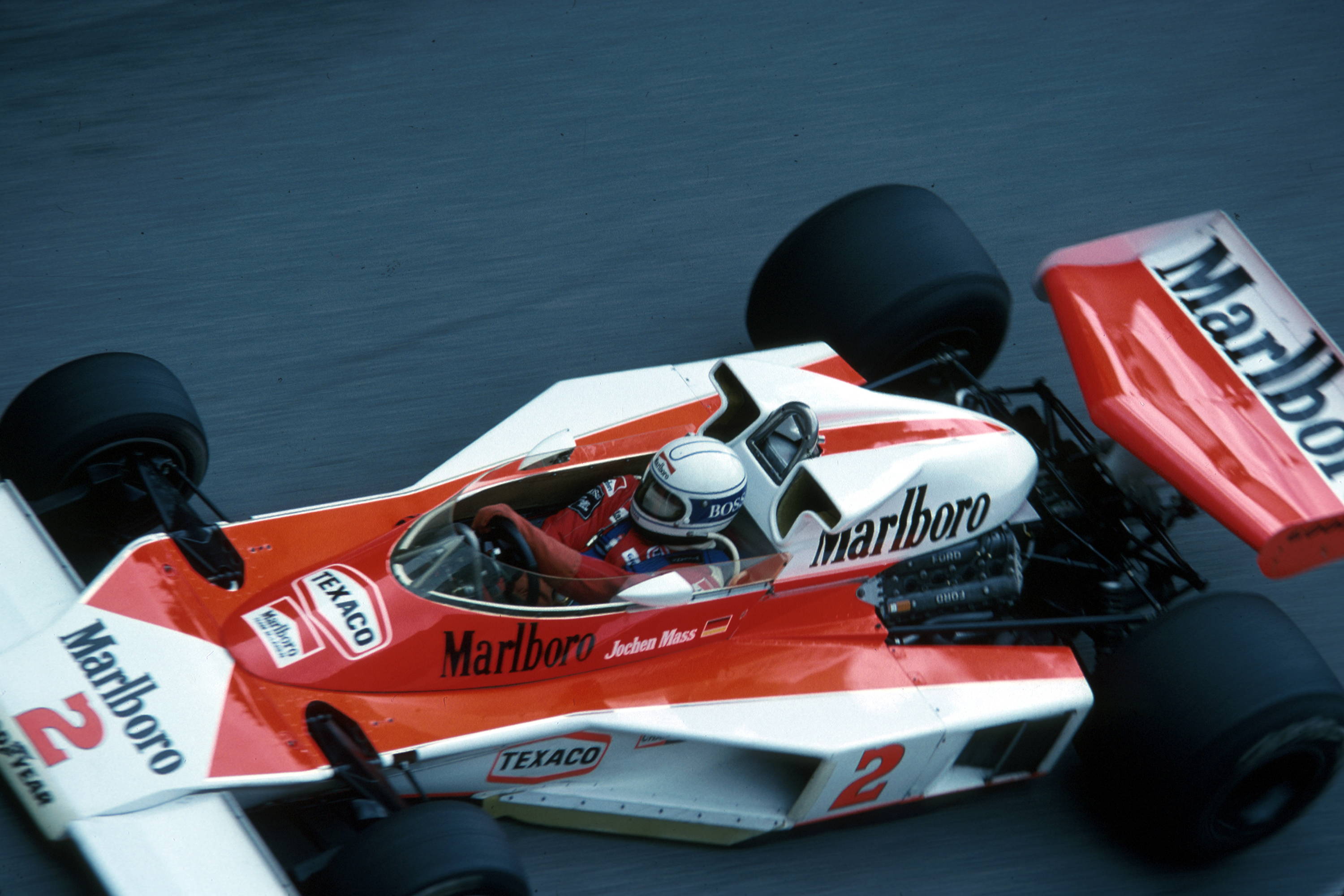 If there’s a real rival to Lotus’ machinery for the title of car of the decade then the only serious rival must be Ferrari’s stunning 312T.

With Ferrari slumping in 1971 and 1972, beaten by the British Cosworth-powered squad dismissed as garagistas by Enzo Ferrari, something had to give. Luca di Montezemolo was appointed as team manager and his first action was to reappoint Mauro Forghieri as

chief engineer. The result was the exit of the troubled 312B and the design of an entirely new machine, the 312T.

Introduced for the third grand prix of the 1975 season at Kyalami in South Africa the 312T scored its first win at the following race in Monaco. The Austrian won three of the next four events and wrapped up his first title (and Ferrari’s first since 1964) with third place at Ferrari’s home race in Monza. He added a final win of the year in the US for good measure.

Lauda would take a second title with the 312T2 in 1977 and Jody Scheckter would land Ferrari’s last Driver’s title until Michael Schumacher in 2000 with the T3 and T4 ion 1979, while Ferrari won four Constructors’ titles with the T variants only missing out in 1976 following Lauda’s crash. Add in Gilles Villeneuve flinging the 312 to multiple podiums and wins and you’ve got a proper 1970s icon. 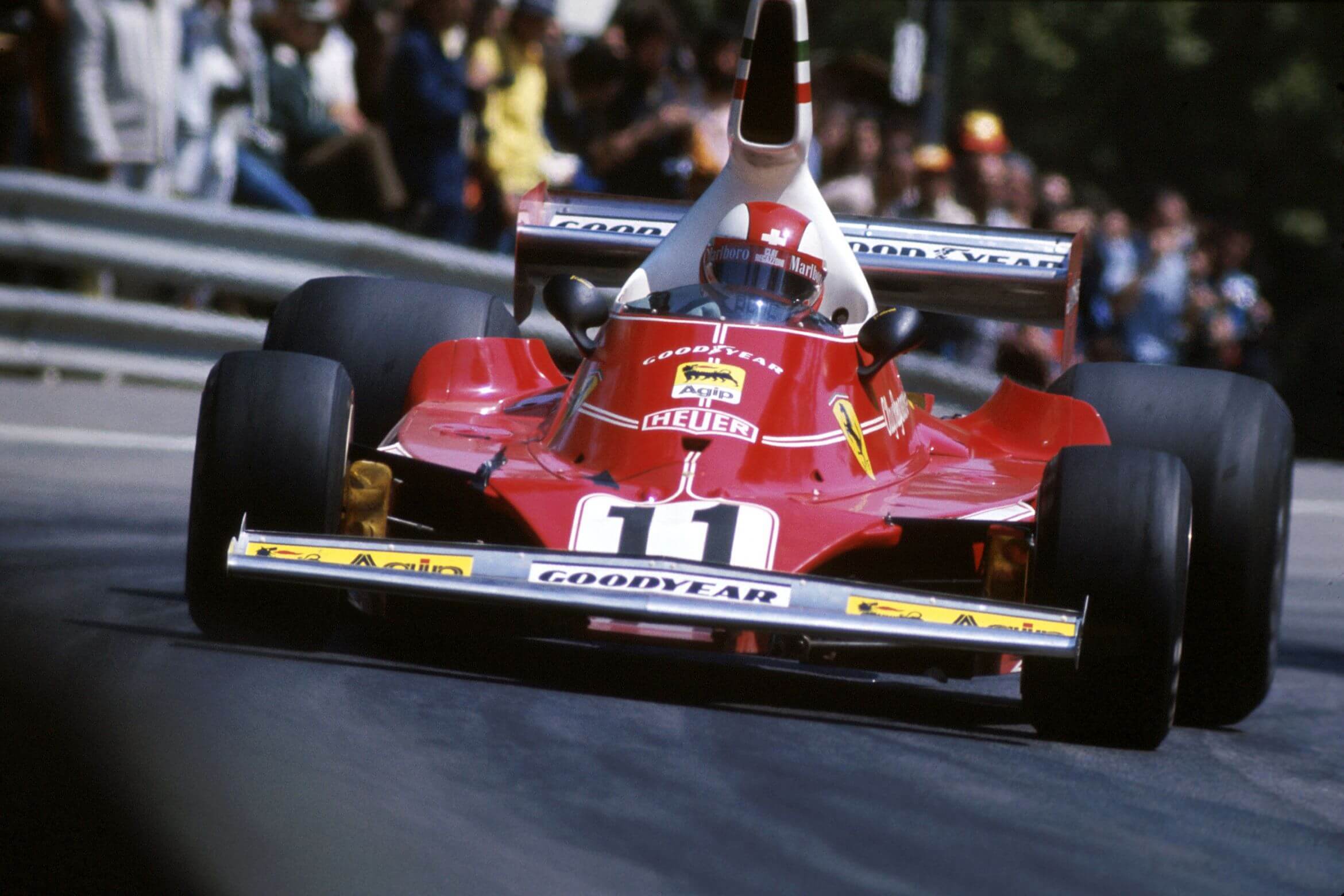 With Ferrari seizing the reins of F1 dominance in 1975 Colin Chapman again retreated to the Lotus workshops to plot the next revolution. It wouldn’t be the 77, which was driven to a sole win by Mario Andretti in Japan but it would begin with its radically different successor, the 78. Tasked with reimagining the shape of an F1 car, engineers Peter Wright and Tony Rudd returned to failed experiments with ground effect conducted while at BRM in the late 1960s. This time, employing skirts to maintain a seal with the surface below, the research was a resounding success. Utilising the concept, designers Ralph Bellamy and Tony Southgate worked with Andretti to create a new car and the 78 made its debut at the opening race of the 1977 season, in Argentina. Three races later, on Andretti’s home soil at Long Beach, the 78 scored its maiden win. In Belgium Andretti put the car on pole ahead of John Watson’s Brabham by a sizable 1.5s. The benefits of ground effect were becoming clear and the scramble to develop cars exploiting the technology began.

The 78 would take four more wins in 1977 but the real ground effect revolution would occur over the winter with the development of the 79.

To start the 1978 campaign Andretti and Peterson utilised 78s, winning in Argentina and South Africa, but in Belgium two 79s were fielded. Andretti won. And he won again next time out in Spain, and in France, Germany and the Netherlands. The phenomenal car swept the American to his sole title and Lotus back to the top of the F1 pecking order.

The 79 undoubtedly brought about a radical shift in engineering thinking in Formula 1, and created an enduring legend, but the revolution was started with the imperfect beauty that was the 78. 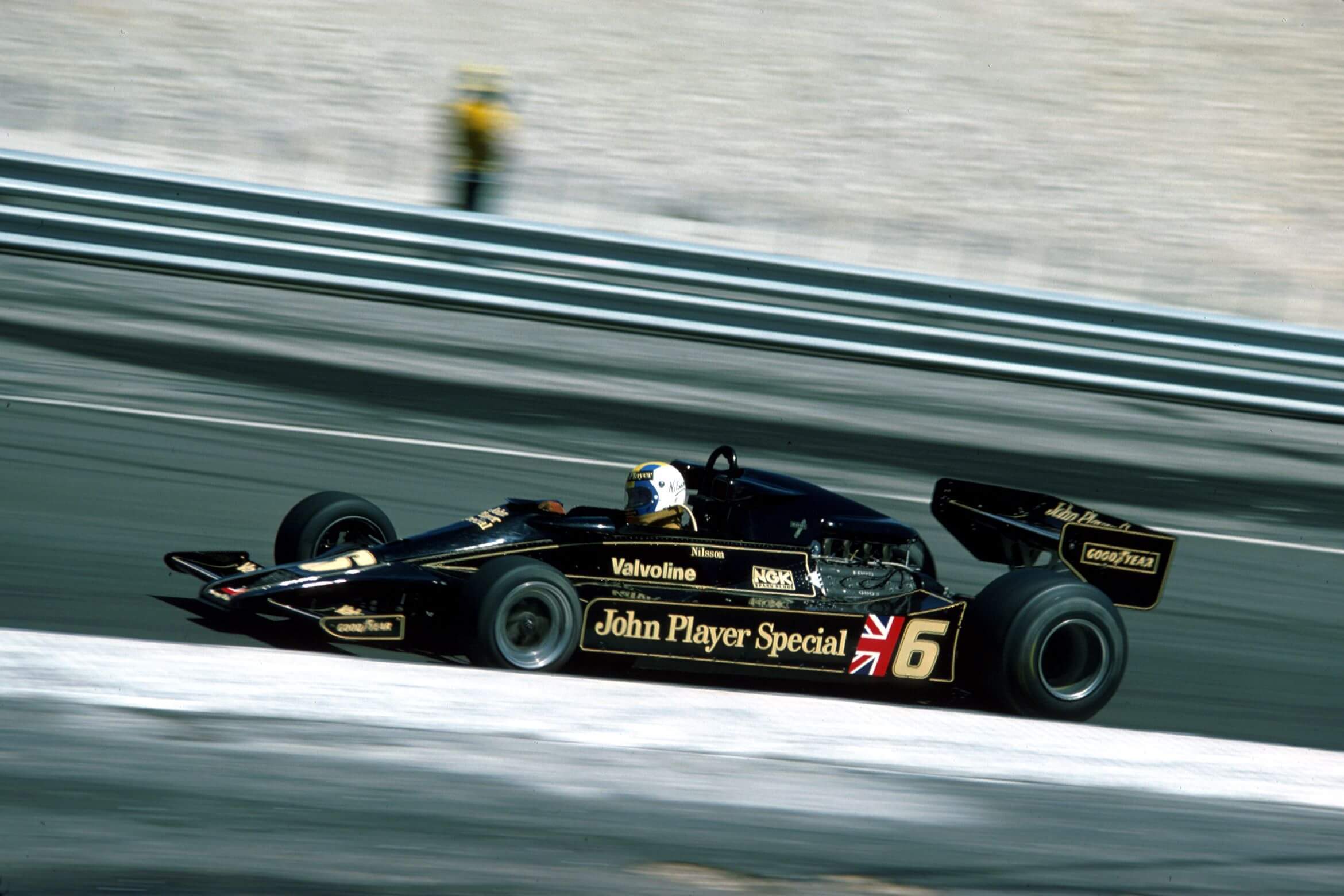 Gunnar Nilsson in the Lotus 78 at the French Grand Prix in 1977. Image courtesy Hoch Zwei

Mad, bad and dangerous to know

The cars above all deserve their place in the pantheon of F1 greats but no list of ‘70s classics would be complete without honourable mentions for some of F1’s most ambitious, rule-bending and influential machines. So to the roll call we have to add the six-wheeled Tyrrell P34 which took 14 podium finishes, including a solitary win, at the 1976 Swedish Grand Prix courtesy of Jody Scheckter. And what about the Brabham Fan Car? Built to counter the ultra-competitive Lotus cars, the BT46B generated huge downforce from a fan at the back of the car. The fan car raced just once before being banned, when Lauda won the 1978 Swedish Grand Prix at Anderstorp.

And though not as radically off-beam as the above pair, mention must be given to Renault’s RS01, F1’s first turbocharged car, introduced in 1977. The Yellow Teapot had a habit of exploding but eventually gave rise to a generation of some of the sport’s most impressively powerful machinery.