At the 2000 French Grand Prix, David Coulthard smelled opportunity. Racing for West McLaren Mercedes, Coulthard was in second in the Drivers’ Championship standings, two points ahead of teammate and two-time World Champion Mika Häkkinen, and within striking distance of the season’s leader, Ferrari’s Michael Schumacher. With Coulthard and Schumacher locked in an epic battle, the race would encapsulate the rivalry between the drivers – usually respectful, but occasionally charged with emotion. 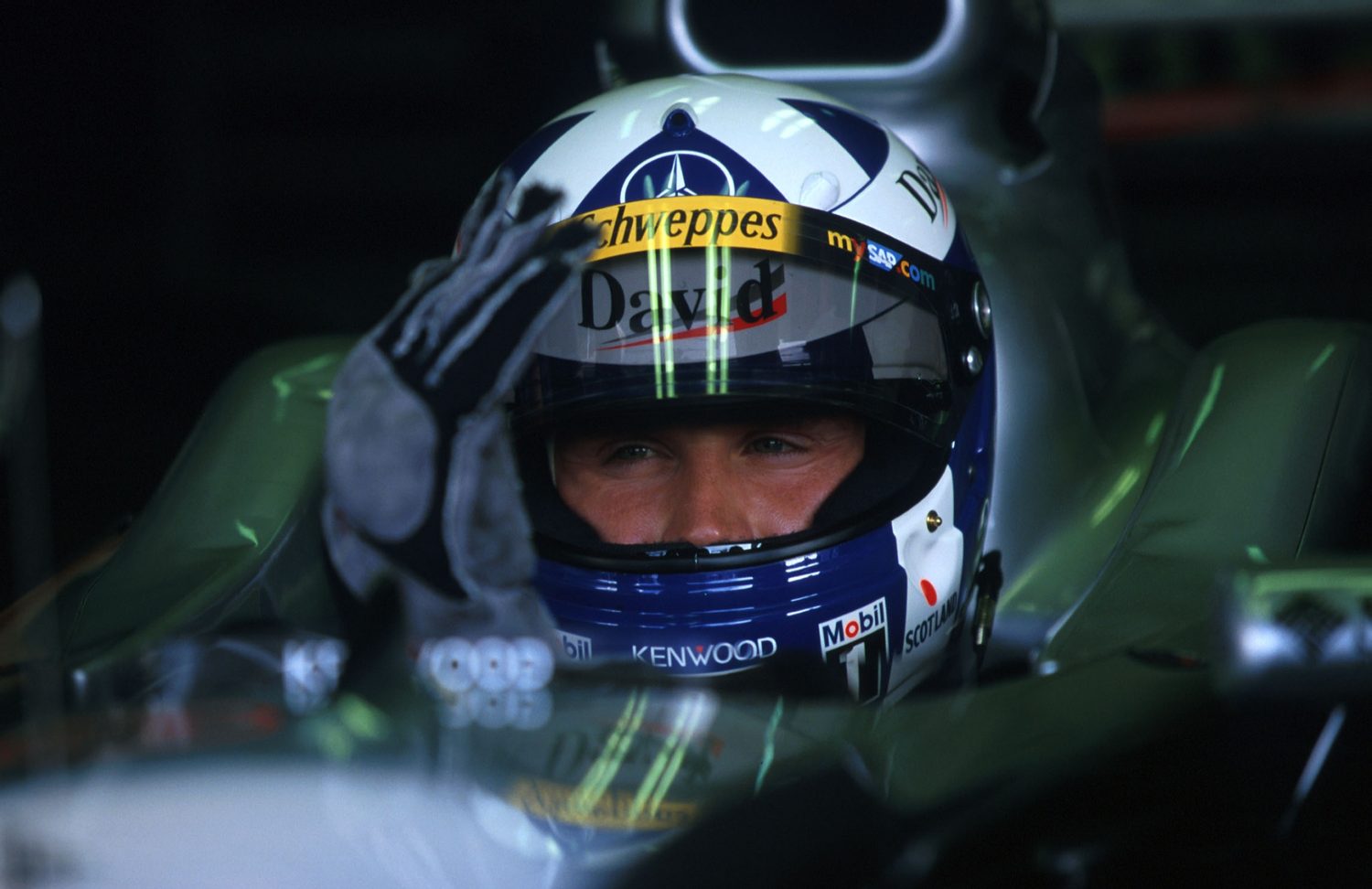 With a solid qualifying, Coulthard secured second position for the start of the race, bested only by Schumacher in pole position. Temperatures were high even before the final red light went out, and with on-track heat approaching 100 °F (38 °C), both teams were on edge early.

Positions changed immediately, and by the end of the first lap, Schumacher had pulled away, followed by Barrichello, Coulthard, Häkkinen, Villeneuve, Frentzen, and (Ralf) Schumacher. For many of the early laps, Schumacher was in control. But during lap 22, Coulthard snuck past Barrichello, putting his rival in his sights.

What transpired over the next few laps lives on in Formula 1 infamy. 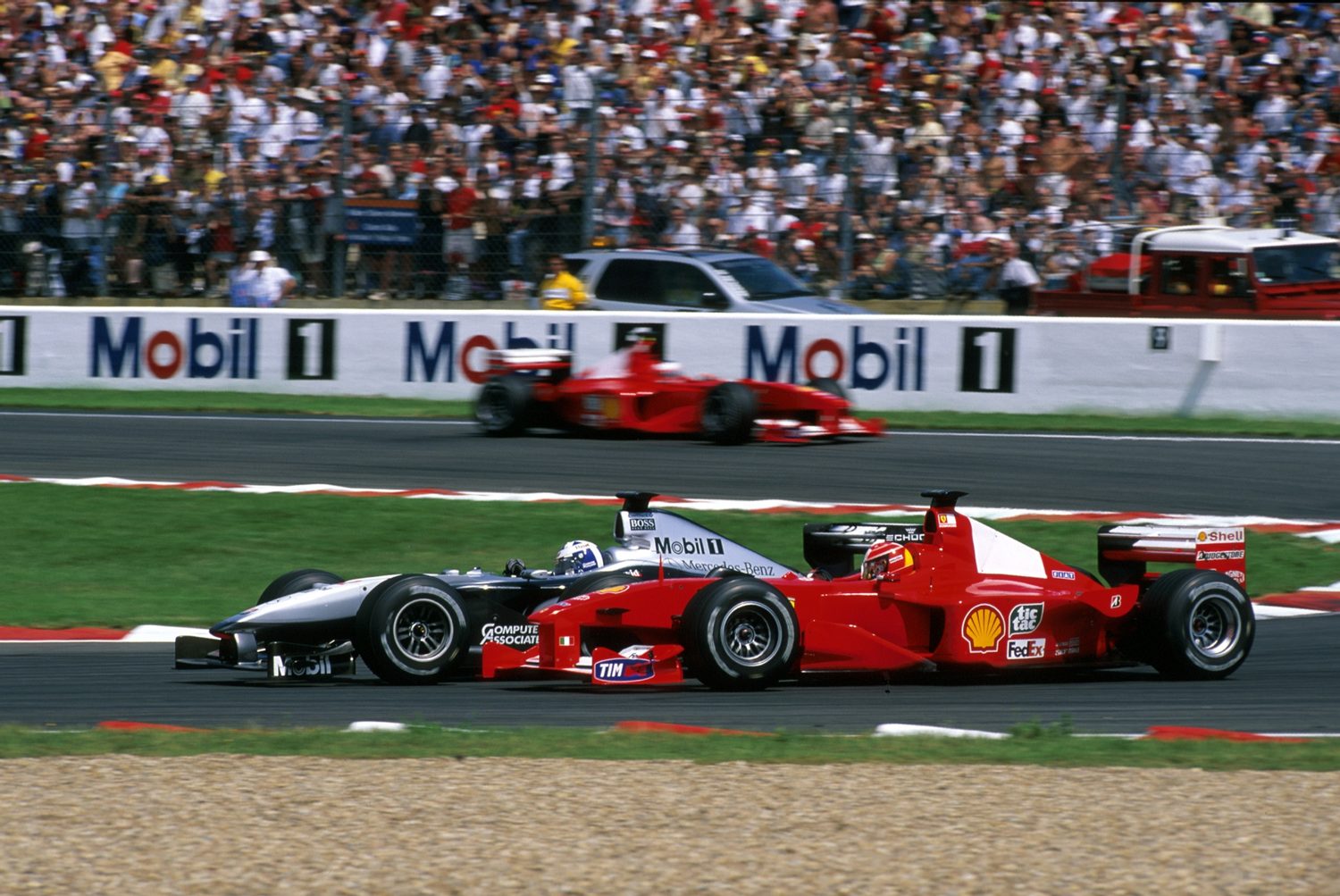 A "Gesture" of Frustration

With Coulthard charging on Schumacher’s rear wing, the gap between the two frontrunners was steadily narrowing, and by lap 34, they were neck and neck. Then, at a hairpin, as Coulthard pulled alongside Schumacher in a bid to overtake, the Ferrari drifted – too much for Coulthard’s liking. To avoid a collision, he lifted off the throttle and, in frustration, threw up an obscene hand gesture in protest of Schumacher’s stunt.

“You might say that he had a right to do that because he had the track position,” Coulthard said in a post-race interview. “But it made me very angry [to see he was prepared] to drive someone wide on a line which he would not normally take.” 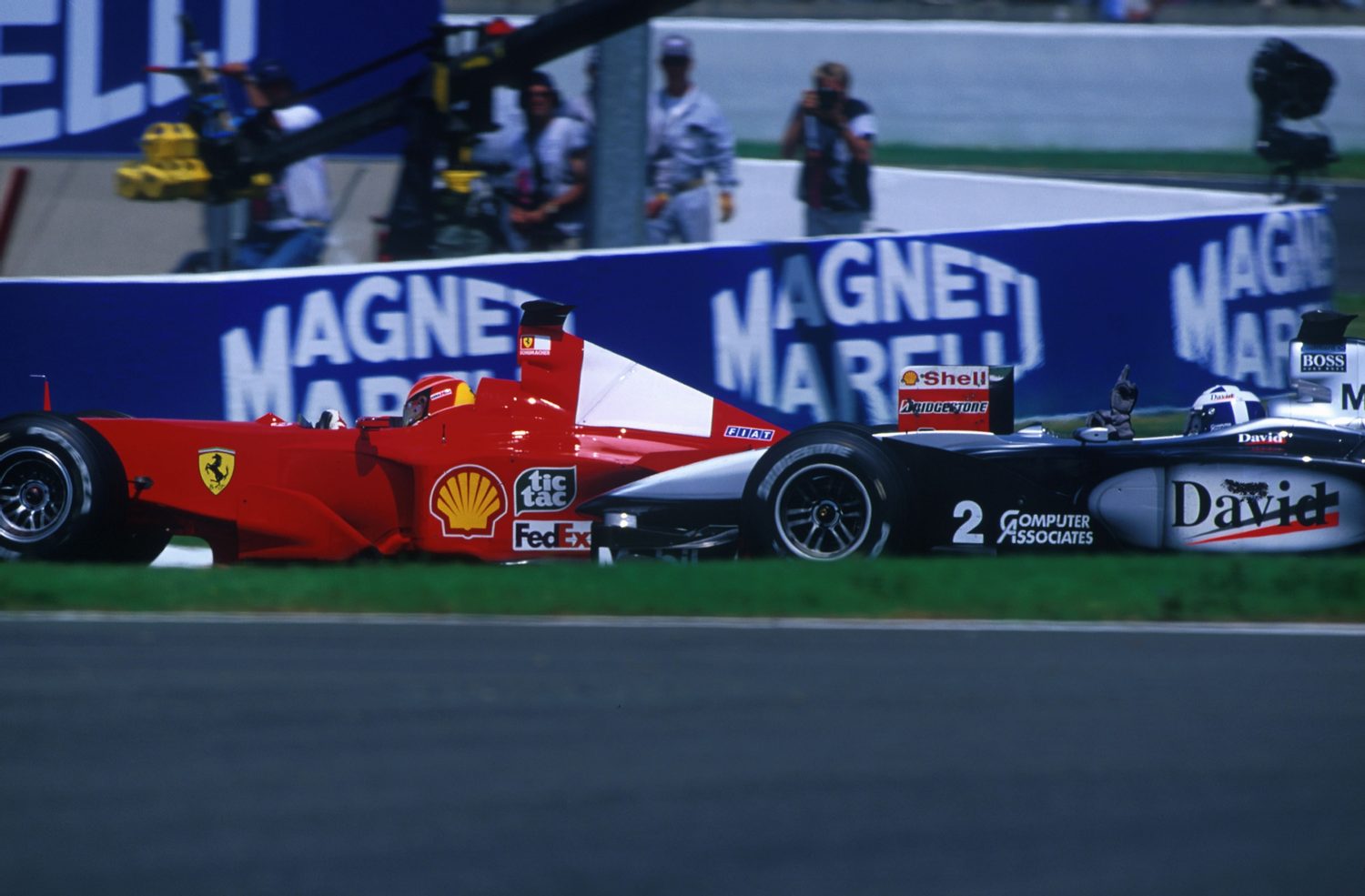 Coulthard kept his hands on the wheel the rest of the way, and six laps after flipping off his rival, put the Ferrari behind him for good. Coulthard went on to win his third Grand Prix of the season, crossing the line ahead of Häkkinen to secure a top-two finish for team McLaren-Mercedes. For Schumacher and Ferrari, the race ended early, with a blown engine on lap 59.

Coulthard’s victory cut the gap between Schumacher in the Drivers' Championship to 12 points, and reduced the Constructors’ Championship to just six points behind Ferrari. It was a good race, but even for the victor, it wasn’t without its flaws.

“I have to apologize for my hand gestures, which were not at all in keeping with the sport,” he later conceded. “But as you can understand, my emotions were running high. I knew that I needed to win here today in order to be in a position to battle for the championship.” 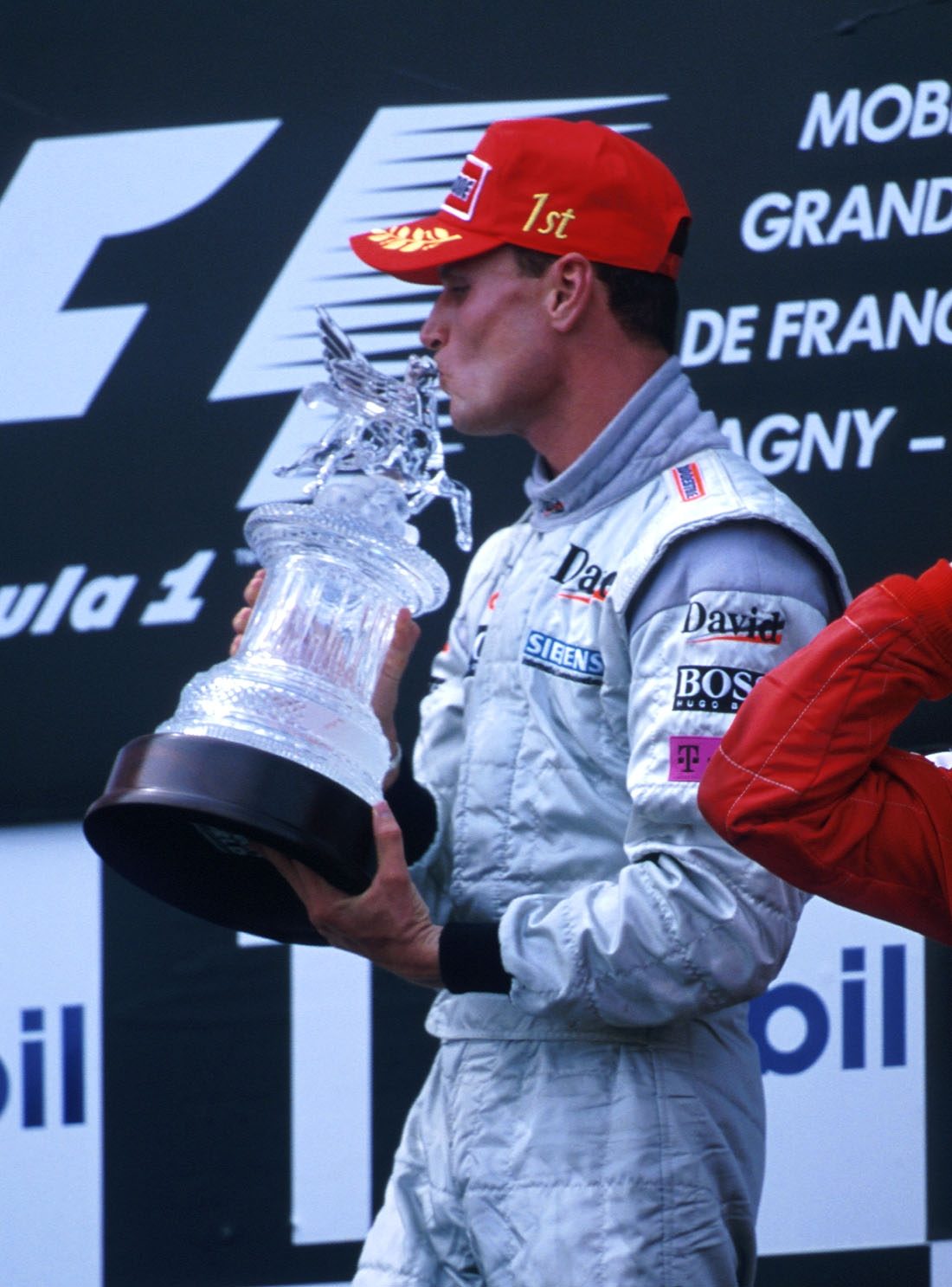 From January 14th, 2020, the first 30 David Coulthard Helmet Posters purchased will be signed by the driver himself. 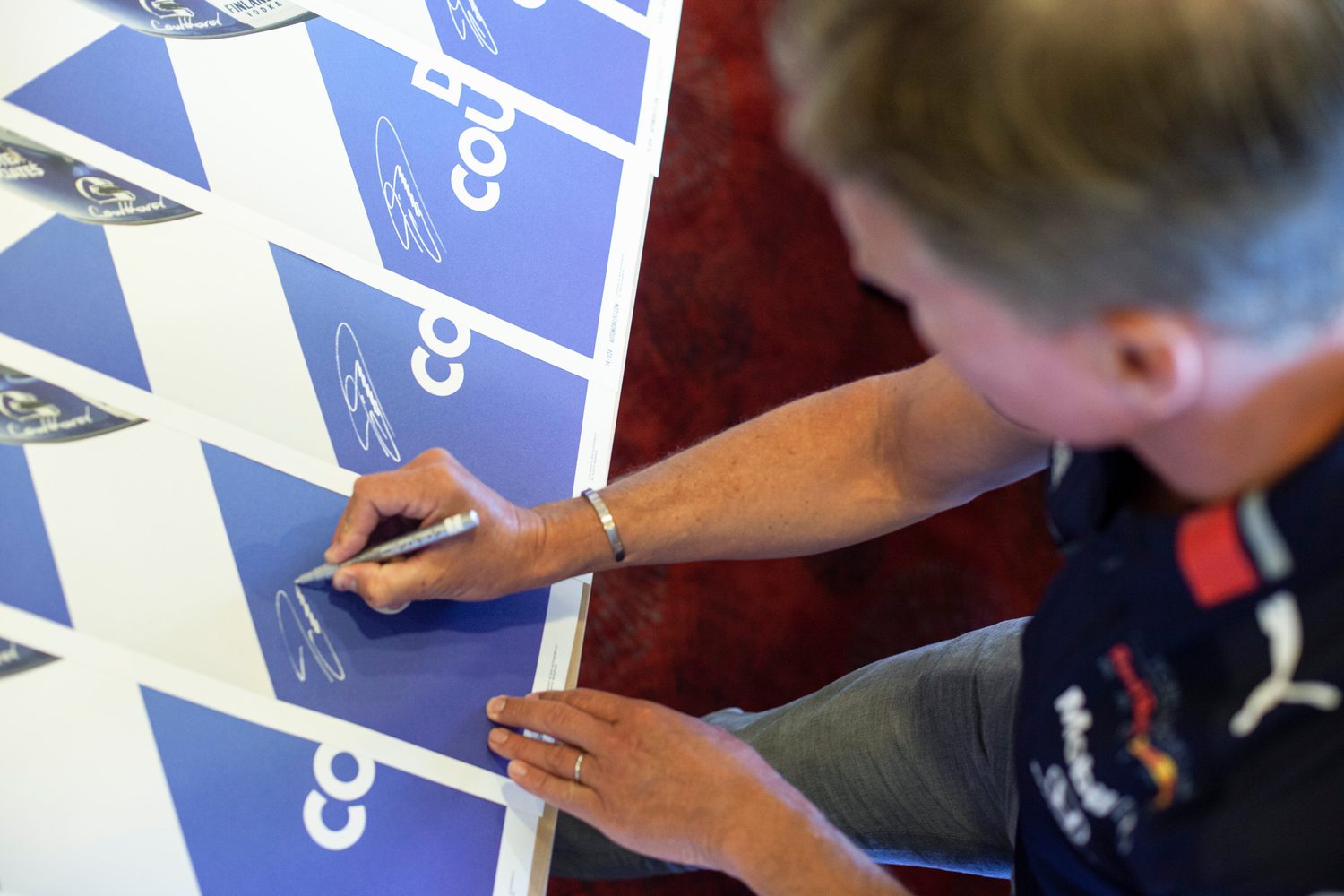 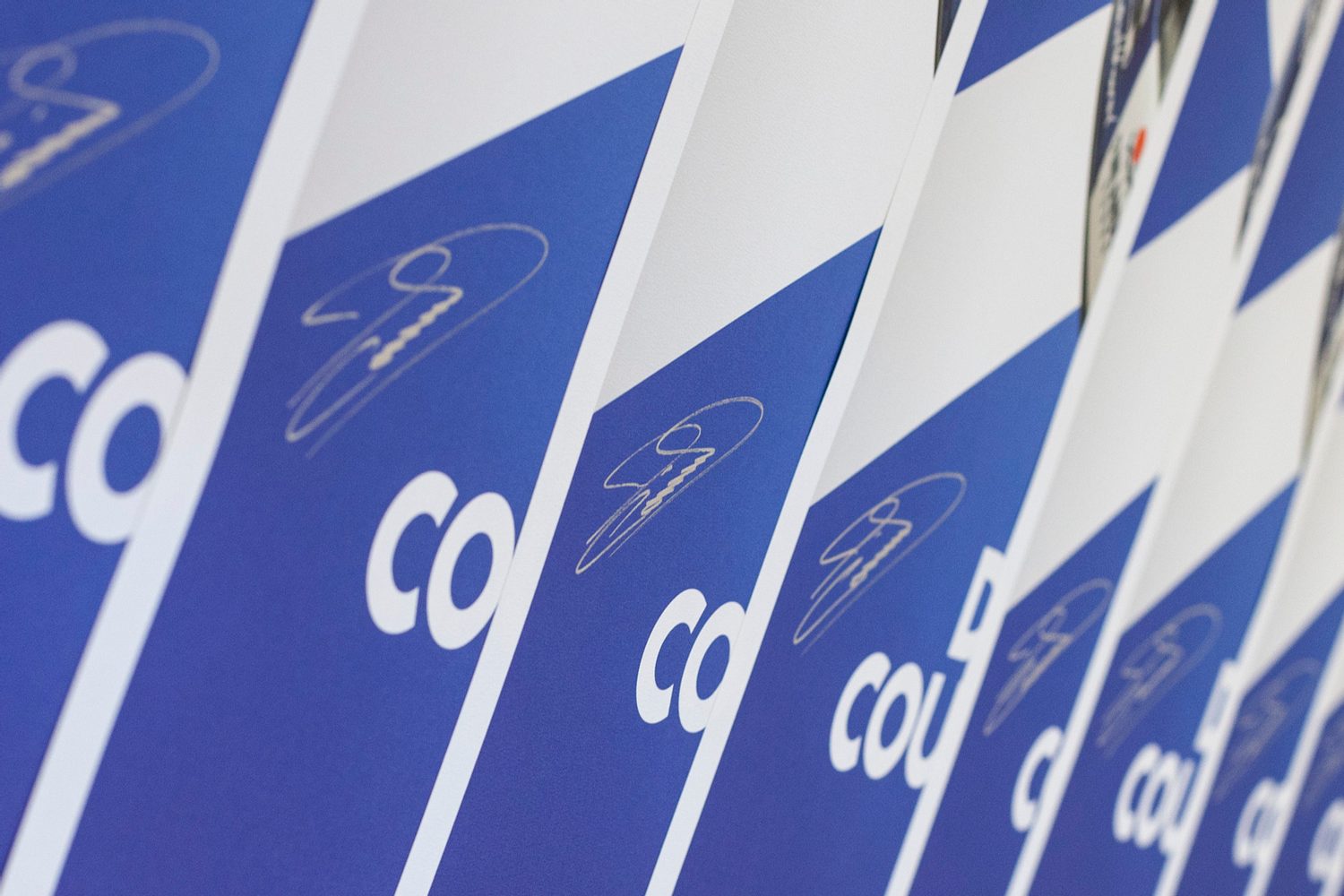