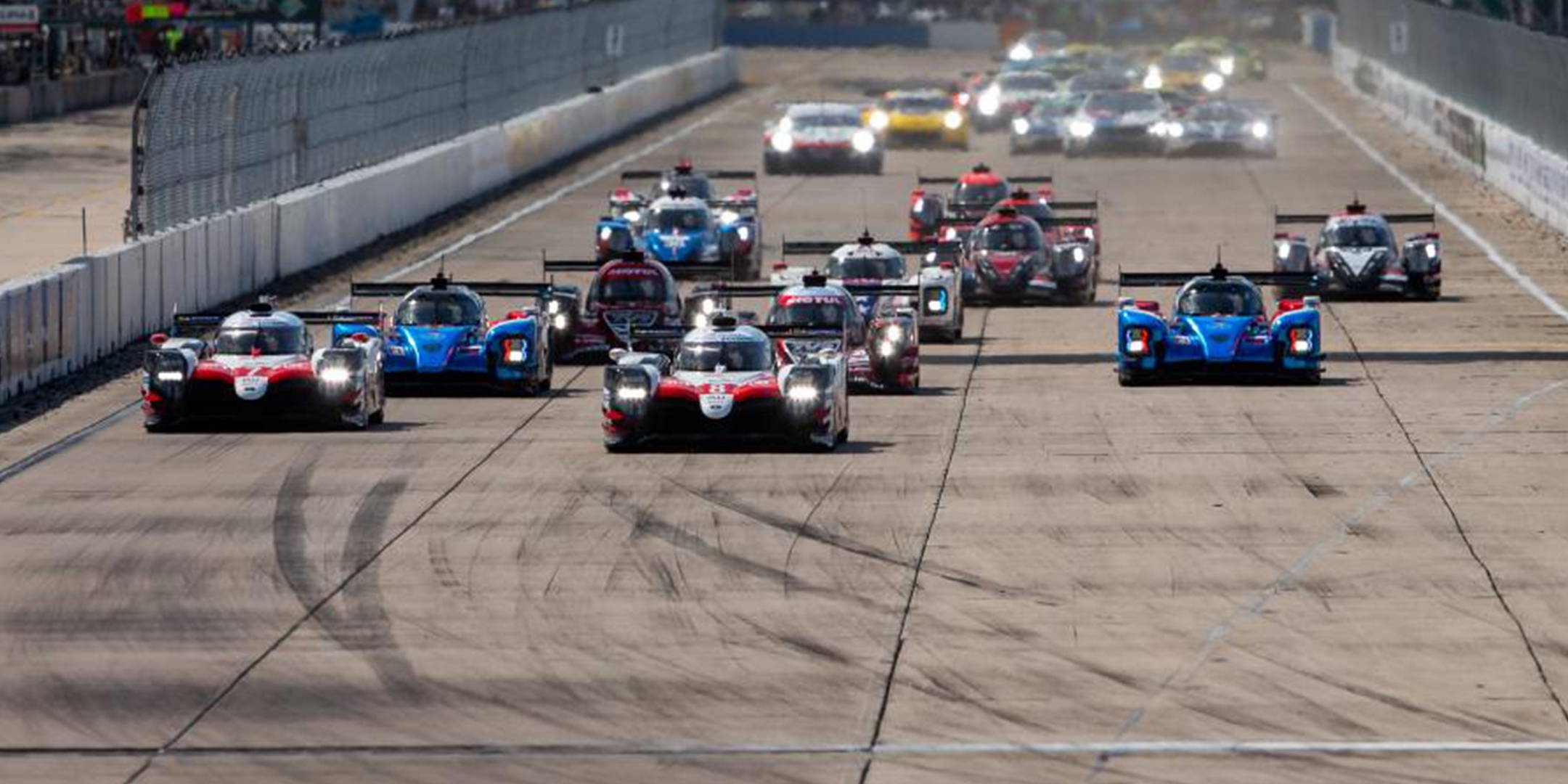 It shouldn’t be a surprise that the United States is in possession of a raft of distinguished racing circuits, given its sheer size and the importance of its own motoring industry.

Indianapolis’ Motor Speedway has become the traditional home of open-wheeled competition, with the Indy 500 the best-attended motorsport event in the world, the purpose-build behemoth Circuit of the Americas – complete with painted stars and stripes run-off – houses Formula 1’s annual visit, while Daytona’s banked tri-oval carries the biggest prestige on NASCAR’s lengthy schedule. But head further south along the Floridian peninsula, past the palm trees and the orange groves, and there’s the Sebring International Raceway – the venue at which sportscars have flexed their muscles across the last 70 years.

Sebring International Raceway is the United States’ oldest permanent road racing facility and, as with several of its European counterparts, owes its existence to the Second World War. An area close to the commune of Sebring was approved in 1940 to be converted into an army base. When the US joined its allies in the war the newly-named Hendricks Army Airfield had a renewed purpose as a training facility for pilots in B-17 aircraft. Once the war was over there was a lessened need for constant pilot training. Instead, Russian-American aeronautical engineer Alec Ulmann, who was involved in converting military aircraft for civilian use, realised that the Hendricks Field runways, access roads and facilities could be used for a different purpose. Inspired by the Le Mans 24 Hours – the French classic by that stage approaching its mid-20s – Ulmann organised a race. Rather than head to a New Year’s Eve party in 1950 a bunch of aficionados instead hurtled around a new circuit called Sebring, with the Sam Collier 6 Hour Memorial race won by Frits Koster and Ralph Deshon in a Crosley Hot Shot. Those present clearly felt that the sunshine state’s new sporting venture had a bright future. 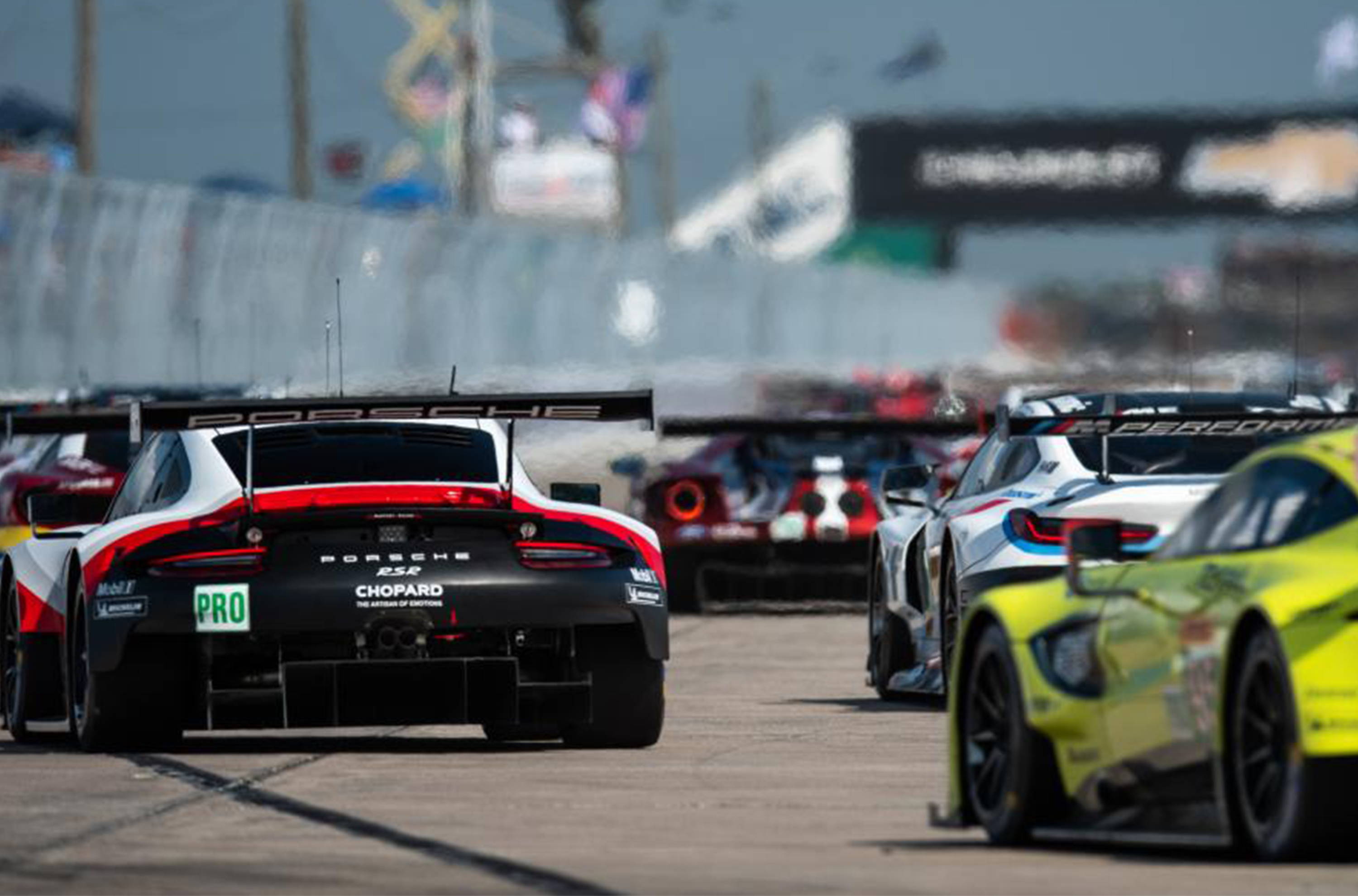 At the start of the 1000 Miles of Sebring. Image courtesy Marius Hecker/AdrenalMedia.com

It certainly had an unusual future, because amongst the memorable performances and feats of driving excellence, some of that Florida madness made its way to the race track. In 1950, the promoter Alec Ulman took Governor Fuller Warren for a lap of the track: nothing wrong with that, except that the race was going on at the time! During the 1957 Sebring 12 Hours, Stirling Moss slowed at the hairpin so that legendary photographer Bernard Cahier could hand him a bottle of Coke, which he threw out of the cockpit next time round.

The Sebring 12 Hours was born in 1952, starting in daylight and finishing at midnight, and a year later it joined the World Sportscar Championship. By the end of the decade its prestige was such that it attracted the biggest names in motorsport, with Sir Stirling Moss, Juan Manuel Fangio and Phil Hill all claiming victory in a field that included a veritable who’s who of esteemed automotive brands: Ferrari, Maserati, Porsche and Jaguar were all successfully represented. 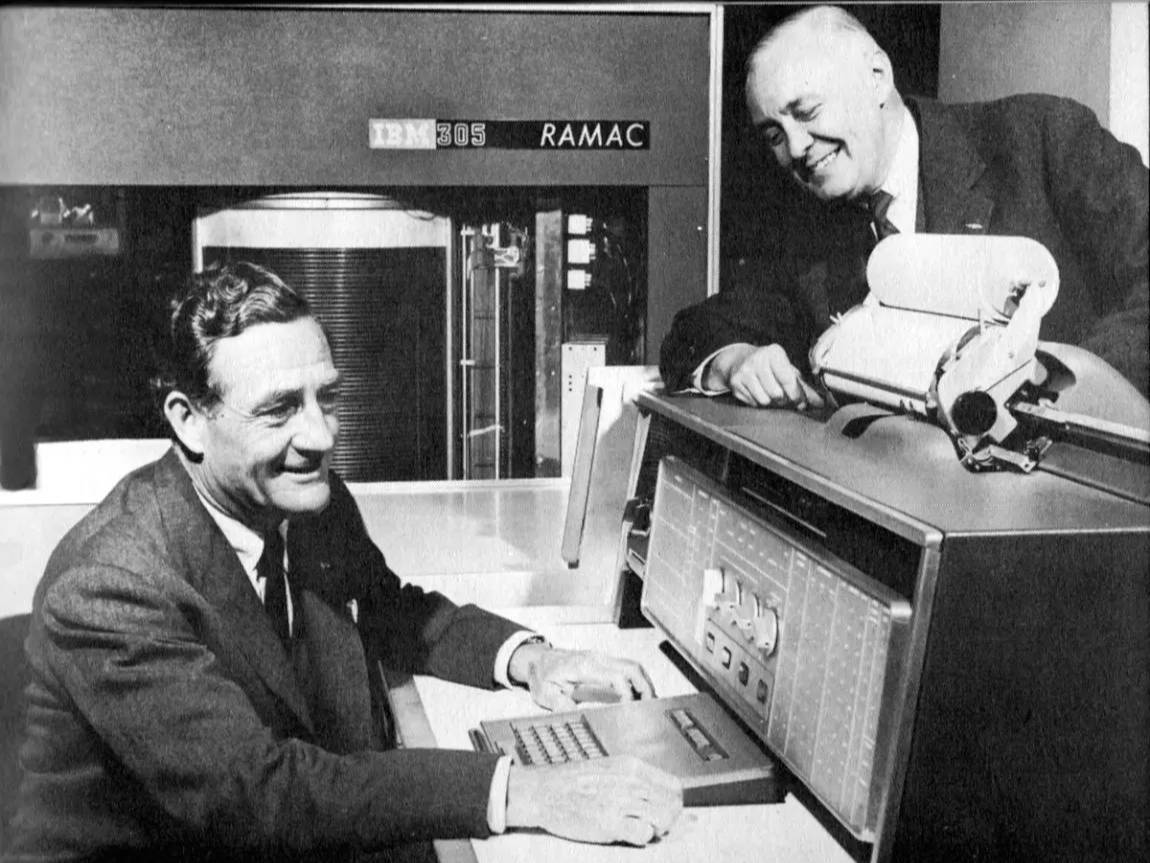 Briggs Cunningham and Alec Ulmann pose for a publicity photo for IBM. 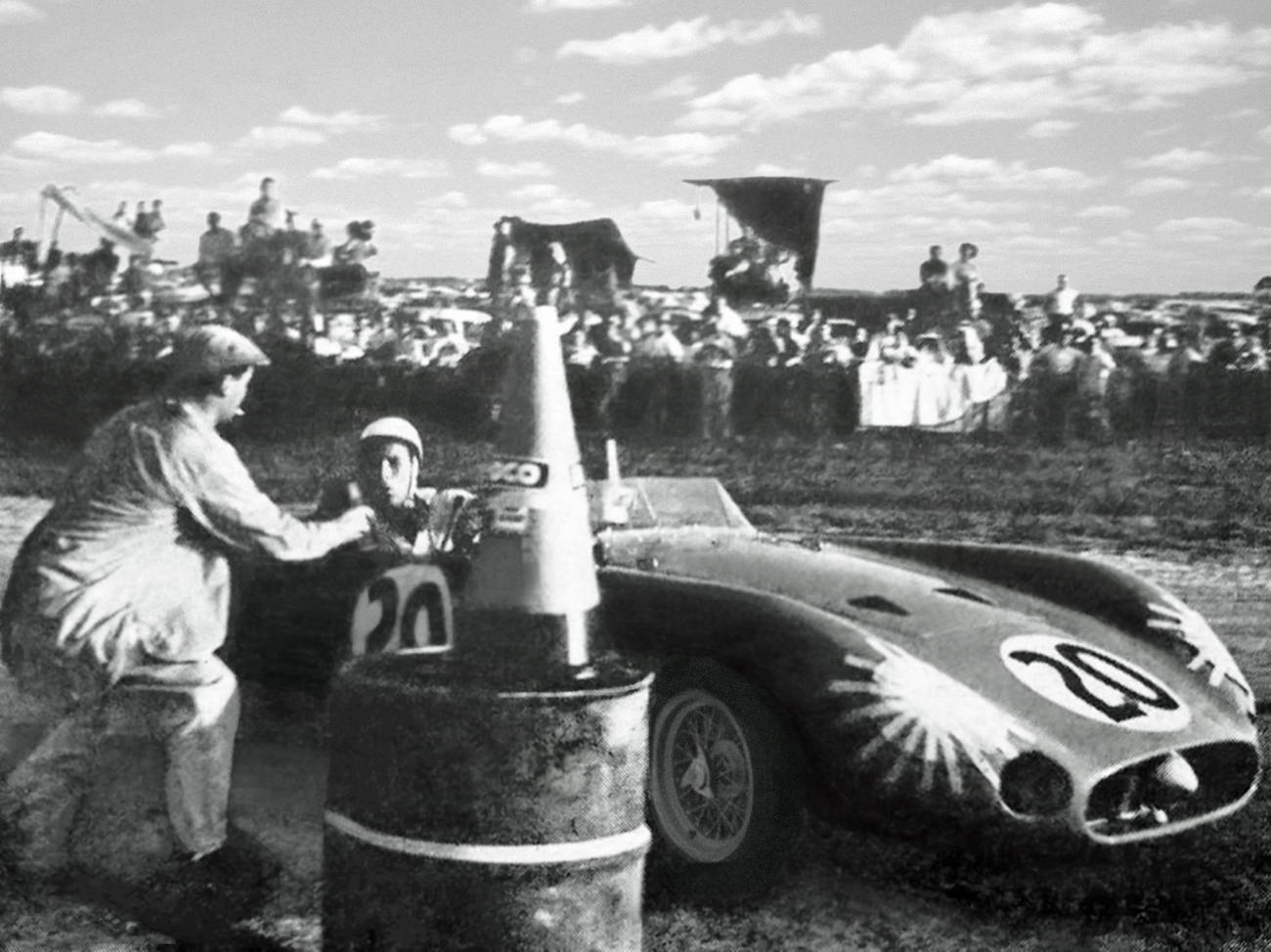 Sebring even hosted the inaugural championship-level United States Grand Prix for Formula 1 and was the decider for a three-way fight for the title. In a thrilling finale, race leader Jack Brabham ran out of fuel on the final lap but in still classifying fourth he secured sufficient points to claim the first of three world titles. The race was won by Bruce McLaren, his first in grand prix competition, but for Sebring the event was far from lucrative – and the finances meant Formula 1 never returned.

Sportscars became the focus and the event continued to grow, with the circuit adjusted, both for the spectacle and for safety purposes, following an accident in 1966 that killed several fans. But it retained its identity and remains a steep challenge for drivers, engineers and cars, providing a rarity in an increasingly uniform landscape. Asphalt constitutes most of the layout but large sections retain the original Hendricks’ Field concrete surface, leading to tricky transitions, while the overall venue is renowned for its rough and bumpy nature. If a car manages to master Sebring then it’ll be ripe for competition at other circuits – or so goes the theory. The spate of medium- and high-speed corners are adored and feared by drivers, particularly Sunset Bend, the long-radius 180-degree final turn that has led to some side-by-side moments – as well as some monstrous accidents. A fair few barriers, side-panels and bruised egos have needed some TLC through the years. Porsche has proved to be the pacesetter, taking 18 victories, including an astonishing 13 in a row during its heyday of the 1970s and 1980s, while since the turn of the millennium its counterpart, Audi, has outlined the supremacy of the four rings. 11 wins, including eight on the bounce – and a driver record of six for sportscar legend Tom Kristensen – has given its museum staff plenty of trophies to shine. 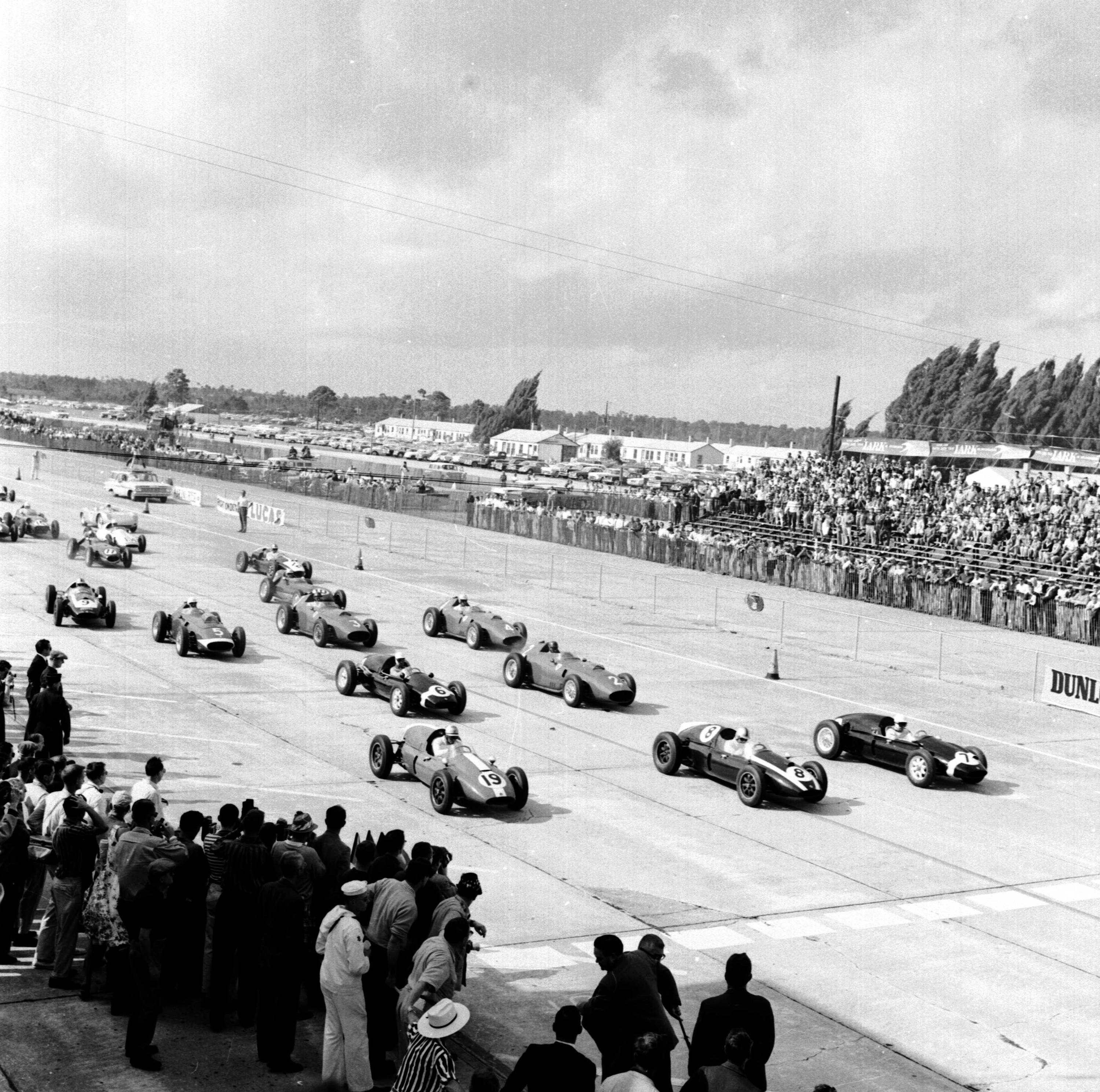 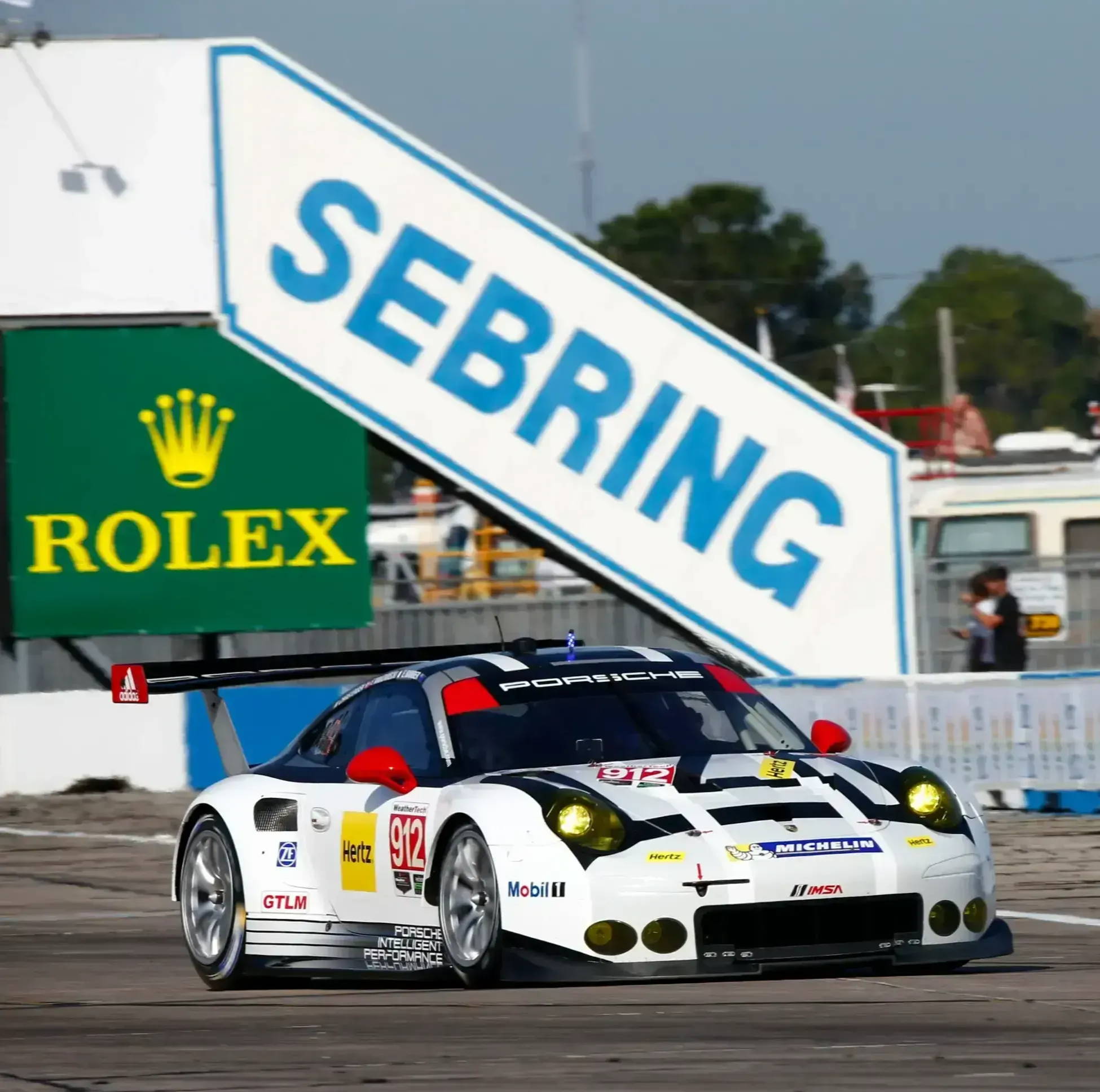 2019 onwards, Sebring welcomed back international-level sportscar racing at the 1000 Miles of Sebring, which took place prior to the 12 Hours. Image courtesy Hoch-Zwei

From 2019 Sebring welcomed back international-level sportscar racing at a new event, the 1000 Miles of Sebring, which took place prior to the 12 Hours. But unfortunately the pandemic has so far restricted the concept to being a one-off, rather than the start of a new era, but as sportscars continues to blossom – with soon-to-be-introduced hypercar regulations enticing global marques – there’s every reason to expect Sebring to remain a sportscar haven as the arena enters its eighth decade.